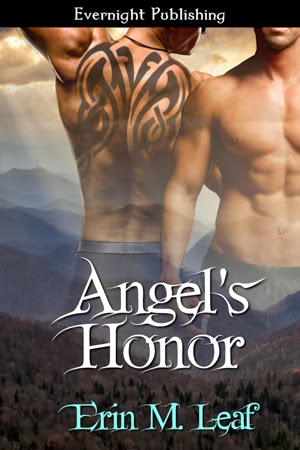 Raphael never believed the Omega angel myth could be real, at least not until the morning he woke up and his wings had changed from ordinary brown to purest white. How could he be an Omega, the destined mate of the Alpha? There hasn’t been a true Alpha leader of the People in centuries. However, when ebon-winged Gabriel suddenly shows up and claims him as his destined mate, the attraction is instant.

When Gabriel’s brown wings suddenly change to ebony, he must accept that he is the Alpha, God-chosen leader of the angels. When he discovers his destined mate is another man, he realizes being Alpha means more change than he’d expected. And when he’s wrongly accused of committing one of the People’s most dishonorable crimes, Gabriel must fight: for his honor, for his mate, and for the survival of his People.

I usually try to avoid stories that involve angels. It's just me, I have such an awe for these beings that anything written about them can sometimes place me at odds with some opinions. I have read some and I have loved them, the others I don't bother with.

That said and out in the open, the blurb for Angel's Honor got me curious for I had never read a story about angel shifters before. I was intrigued that an author could place such a spin and instead made them into shifters instead of supernatural beings.

The story started out very well. We see Rafael meeting with his older brother and who practically orders him to the Archangel's castle, he did not like it but found himself doing so.

Then we meet Gabriel, an ordinary, regular angel who wakes up and finds himself changing into an Alpha Archangel with black tattoos and wings. He also felt a shift to his being and felt a power he knew not what. He can only remember what his father once said, that their family and once been the Alphas of The People - The Angels. He also knew he had a mate, Rafael.

Rafael suddenly changes himself, into a white angel. Being a keeper of the lore, he knew what it meant: he is an Omega, the destined mate to the Alpha.

A challenge is thrown and Gabriel accepts. His winning, however, opens the doors to a dark evil lurking within The People's midst. Demons had infiltrated their domain and no one knows what is to come next.

The whole idea of The People as shifters is intriguing and quite a change. The names of Gabriel and Rafael as mates or as Alpha and Omega is a play. These are the two strongest archangels in lore and religion and seeing them here as mates was different, but strangely enough, it was fascinating to read.

This is a short read, and very light. That is the only problem I had with this story. I really wanted more out of this and it left some holes. However, this is only the first of the series and it is curious to know what is to happen in the next book that involves Rafael's brother and Gabriel's sister.
Posted by multitaskingmomma at 3:01 AM