Review: The Choosing by Annabelle Jacobs 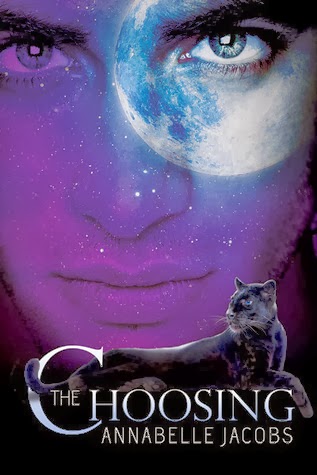 Jerath is facing the biggest problem of his life. When boys in his shapeshifter village Eladir get their fangs, they must endure a coming-of-age rite called the Choosing, so they can take on their animal form. The rite is performed on the full moon, but the trouble is the Choosing involves having sex with a girl, and Jerath’s only interested in boys. Even if he manages to somehow get through the rite, he doesn’t know if he’ll ever find a mate in his village, where opposite-sex couples are the norm.

Even worse, he may miss the rite altogether after raiders attack his home and take several young men prisoner. Jerath will need the help of warriors if he’s to free the captive shapeshifters, so with his best friend, Serim, he flees south to find aid. Along the way, they meet Meren, a handsome warrior whose attraction to Jerath is instant and very much returned. But with the next full moon approaching and available time for the prisoners to undergo the Choosing running out, Jerath’s love life is far from his only worry.

The Choosing was a very nice surprise for me. This was filed in my Holiday Reads folder and frankly kept this for last for I honestly thought this was just another paranormal shape-shifter story. Well, it is a paranormal, shape-shifter story but somehow this came out strong and very visual.

This is basically the story of Jerath and his coming of age as a shape-shifter. Through some unfortunate events, his rite through Choosing was interrupted because of the kidnappings of some of his friends and he and his best-friend Serim find themselves in the middle of nowhere, running for the one village they had heard would help theirs out. Along the way, Jerath's fangs descend and Serim goes through the rite with him. (At this point, I have to warn those MM purists out there that there is the one MF scene necessary written in. The necessity is for Jerath to get through the rite and be able to shift. Without Serim, he could have lost all.)

Soon they meet up with the hunters led by Meren, the chief's son who come from the very village they were searching for. What takes Jerath by surprise is the bond the rises between them. Coming from a village that sees same sex bonding as wasteful, it took some time for him for adjust to Meren who sees this as a normal pairing.

The bonding between these two young men was formulaic, but that is as far as this book's formulaicness goes. There is none of the rushed screaming out the primal MINE! for one. Instead, we get a gradual acceptance of the other, a gradual learning of each other, and a gradual loving. This is what made this whole book a bit different from the rest.

What really got my attention was the way this was written: it is in present tense. It was quite different but somehow it lent a bit of mystery to the story. (I know, I may not make sense here, but bear with me.) This style of writing just made it more 'present' for me. This 'presentness' made what was next to come in the story a bit more mysterious, less predictable.

The mystery is implied. There are some questions that came up and yet left unresolved like who were those men who kidnapped the young, unshifted males or what was that chain mentioned by the kidnappers that made shifting impossible? There is more of a story here than what is written. This makes me think there is a sequel to this or this may just be the beginning of an already unfolding arc.

All in all, this was a really light read and yet it left me satisfied no end. The romantic aspect was sweet and the bit of action told was quite visual. The whole story was just told in a manner not quite what we may be used to but still gave me that 'oomph' I was looking for. Yes, this surprised me, but it did so in a really good way. So yeah, goofy smile on!