Note: This book was given as a gift by Jess Buffett for me to enjoy and NOT for review purposes. She said it was meant to distract me after that horrible typhoon. Her email was the very first one I opened after I bought this iffy-at-best-connection portable wifi just to stay connected to the rest of the world. It was such a great and fun read, however, and had a totally unexpected twist to it, that I just could not help but post a review. This is unsolicited but sincerely done review on a book for an author who is also a good online friend. Thank you Ms Jess! **mwah** 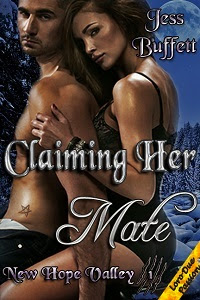 For more than seven years, Summer Ashcroft has had to watch the man she knows is her mate, go about his life, ambivalent and distant toward her. As one of only a few tiger shifters left, the pressure on her to mate threatens to suffocate her, leaving her to wonder if is she strong enough to risk it all to be with him.

Evan MacKenzie has known Summer all of his life, and has forcefully maintained his distance from the gorgeous woman. Staying away seems to be his only recourse since he is unwilling to risk losing the one person that still makes him feel as if he has a heart. When it's realized he is the key to things left out of their control, he finds himself at a crossroads.

Mistakes are made by both, but when the truth is discovered, the pair is thrust together in unimaginable circumstances. They must work as one to search out answers for Evan, and secure a future for Summer’s species, but are they strong enough? Or will forces set into motion thousands of years before, keep them apart?

Summer has known Evan for most of her life and had a huge schoolgirl crush on him for, forever! When she turned eighteen, it was only then that she realized her crush was, in fact, her mate. You see, Summer is one of the last White Tiger Shifter females left in a world where shifters and man co-existed in harmony, if not in secret at times.

Evan is business partners with Summer's father and brothers and has known about shifters most of his life. He has looked to Summer as a young sister but things changed uncomfortably when he realized that the little girl had grown up to be one sexy, beautiful woman. Thinking the brothers, who were his friends, would not really appreciate him oggling their younger sister, he steps back. Tsk, tsk. If he only knew the truth.

When the book opens, the readers are immediately thrust into the history of shifters and the foretelling of a black future. As the shifters learn to accept this bleak to-happen reality, they make preparations and make sure that the prophecy is met prepared. When Summer mates with Evan, the situation turns dire as those who wish to change the prophecy and profit from it, turn to violence. Summer and Evan find themselves right smack in the middle of a fast changing world.

The story was a fast read for me. Reading the blurb, I immediately thought of the same formula where, shifter or not, the woman is always a damsel in distress. However, author Jess Buffett has a tendency to keep surprising her readers. Instead of a missish, distress-filled drama laced with erotica, we get a woman who is strong, willful and quite the dominant shifter. Yes, Evan is dominating in his own way, don't get me wrong. But beside Summer? Holy cow, that woman can kick butt.

Then right when I thought, okay this guy is wimpy, we see the prophecy unfolding and Evan's potential starts to kick in. Again, holy cow, this guy can kick butt just as well! If only he knew what he can do with it and control it.

Claiming Her Mate is the first book in the New Hope Valley series and really introduces us readers to the characters and the story arc. This first book leaves us hanging, yes, but wanting to know what comes next. It left me feeling like I was watching a story as it slowly unfolds and the next installments will get that whole story out. Yes, this is a light read. Yes, this is a prelude to a series. But it was fast paced and had an arc that was different and interesting and mysterious all at once. Especially after that Epilogue. Hmmmmmm, Ms Jess has this talent for giving us Prologues and Epilogues that just leaves us panting for more of her stories.

Posted by multitaskingmomma at 9:33 PM