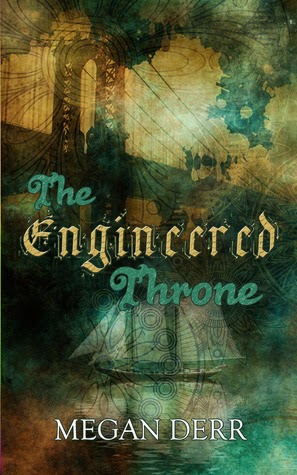 Lord Vellem is a man desperate for escape. His father hides from his problems in alcohol, his mother hides from her misery in drugs, and his brother fled to the relative safety of the royal palace. Vellem eventually found solace in the Royal Army Corp of Engineers, but still could not entirely escape. Then his brother provides him with an unexpected chance, and now Vellem's marriage to the young prince of a neighboring kingdom is only months away.

The marriage promises not just a fresh start in a new land, but a challenge to his famed skills in building roads and bridges. But before he can settle into his new life, tragedy strikes, and Vellem isn't certain he's up to rebuilding the ruin left in its wake.

Note: This story started as a LT3's Serial Fiction in February 2013; this Goodreads entry is for the published version

This is another science fiction/fantasy novel I had the good fortune to read. Written by Megan Derr, The Engineered Throne tells of a far away world totally different from our own. In this world, there are dragons and magic and anyone can marry anyone. Sounds a bit Utopic, but it is not. In this world, when greed is combined with insanity, no matter what planet or civilization, nothing good will come out of it.

In this war torn world, Vellem is the younger son of a mad and violent Duke. His eldest brother sees a political way out and lists him in as candidate for the youngest prince of a nearby kingdom they were at war for centuries with. Surprisingly, the marriage bargain is approved and what could have been a beautiful and peaceful solution to a war-torn situation, turned even more dire.

The threats on the life of Vellem in his own home settles the proxy marriage deal. Unknown to him, there are political and royal conditions to be agreed on despite being unprepared. This does not stop the threats, however. Instead, the violence escalates. Soon, Vellem finds himself in a situation where he is now commander of all, in the position of royalty. He is unprepared, obviously, and it does not help that he does not really know his husband, Prince Perdith.

For Prince Perdith, getting married to a man who was considered legendary in his war and engineering exploits, it was a time of confusion and fears. The violence that rocked his kingdom thrust him in a position he thought he was unprepared for. It takes time to get to know a husband and learn to trust each other, but in the situation they were at? It was near impossible.

The story of Perdith and Vellem could have gone the ordinary and quite formulaic way we may be all used to. However, Megan Derr took it a step further and expanded the whole story to become more than what the blurb actually suggests. The inclusion of an adorable, flower offering dragon pup quite stole the show and was the one character that brought so much light to this otherwise dark story. The love that finally bloomed between the men was expected as well, but it was not sudden. It was a little drawn out. The wars and action and killing packed this story from start to finish and the blood-thirsty in me was joyfully satisfied. All these events were seemingly at odds with each other just made this one of the more enjoyable and well-rounded books I have read.

I have read quite a few works by this author and to be frank about it, this was the most enjoyable read of all. Yes, there were some editing mishaps but they were negligible in my opinion and I never am one to look for a perfect work. Hard to put down, it is a fast developing book that astounded me no end. I just could not help but love Krisanta, I wish he were mine, flower eating and all. Overall, a joy to read.
Posted by multitaskingmomma at 3:01 AM