Review: How I Met Your Father by L.B. Gregg 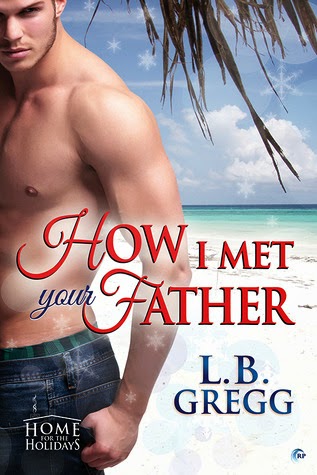 How I Met Your Father
by L.B. Gregg

The man of your dreams could be sitting right next to you.

Former boy band member Justin Hayes isn’t looking for a man. He just wants a quiet, scandal-free Christmas at home in Chicago, out of the public eye. But his best friend and bandmate is subjecting everyone to his destination wedding, and Justin can’t dodge the “best man” bullet. All he has to do is get to the island on time, survive the reunion, and get Chuck to the altar with as little drama as possible. What could possibly go wrong?

Jack Bassinger’s own plans for a quiet Christmas have been dashed by the summons to his daughter’s hasty wedding with a man Jack has hardly met. On the bumpy flight to the island, he finds himself comforting a nervous—and extremely attractive—young man. One hasty sexual encounter in an airport bathroom later, they both feel much better. No one ever has to know, after all.

Now Justin and Jack must find a way to explore their attraction, despite the distractions of disapproving family members, unexpected announcements, an impromptu concert, and an island paradise that proves there’s no place like home.

Oh my, I really, really had fun reading this.

How I Met Your Father is a hilarious, ridiculous and romantic take on what could happen should the guys of The Hangover, 'N Sync, JT and Lance Bass were to all attend a wedding and we readers get the full disclosure of what happens behind the curtains. Instead of five members though, we have four best friends who had been a hit boy band and had all agreed to end their stint as a group before things fell apart for them. Their decision was sound, was made with logical heads and it paid up. Now, all of them are private men, professionals in their own chosen field, still raking in the royalties from their hit albums and singles, and still the best of friends.

Justin Hayes (yeah! he's Justin! hehehehehe) finds himself seeing his life flash before his very eyes as the plane he was on to attend the wedding of best friend Chuck starts hitting all the right air pockets and turbulence. The man beside him, a quiet, blond, older but hot man takes his hand and rides the turbulence with him until it is over. Once they land, they get...laid...up (hiccup).

At the bachelor party where he finds himself in the middle of an impromptu two set concert in an unknown bar, he looks up to find that that blond Jack was none other than his best friend's soon-to-be daddy-in-law!

Things heat up between the two men, much to the amusement of his bandmates and the disgust of the man's son. But all is hilarious, all is nice, all is simply HOT!

I was contemplating to rate this the usual 4 Stars as it is a very light and amusing read, but I just loved it too much and laughed so hard, it was impossible to rate it anything lower than a 5.

So yes, this is campy, this is a short read, but who cares! It was highly entertaining! Perfect!

Note: 20% of all proceeds from this title are donated to the Ali Forney Center in New York, whose mission “is to protect lesbian, gay, bisexual, transgender, questioning (LGBTQ) youth from the harm of homelessness, and to support them in becoming safe and independent as they move from adolescence to adulthood.”

Posted by multitaskingmomma at 5:37 AM