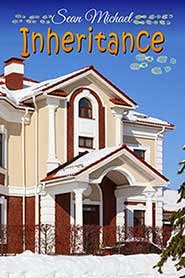 Published November 6th 2013 by Torquere Press
My Rating: 3 of 5 Stars

Cash McCord loves his life. He owns the family ranch, works hard and invites the occasional cowboy into his bed. All that changes when his brother Jack and Jack’s wife Val are killed in a car crash, leaving behind six kids.

Cash is made guardian along with Val’s brother Brad Rafferty. Brad couldn’t be more different than Cash. A Yankee, Brad is a video game developer who works twelve to fourteen hour days at his desk. The two men lock horns on sight, neither man happy to have the other around, but neither willing to give up guardianship of their nieces and nephews.

Can they manage to keep the kids together, and keep from killing each other at the same time?

Hmmmm, what to write, what to say?

I really loved reading Inheritance. It tells the story of how two brothers-in-law gain co-custody of their six nephews and nieces after the tragic death of the parents in a car crash. Surprisingly (or not), it is the remaining grandmother who is the villain in this story. She makes life a living hell for these two men who start out on a fist fight and end up in bed together for better or for worse. Their custody could last more or less twenty years and the two decided to make a go of their lives, despite all.

There were some hilarious scenes involving some ducking-from-spilling-tmi-to-not-so-naive kids whose questions were literally out of the mouths of babes. Then there was the eldest boy walking in on them making out and of course they had to sit him down and do some question and answer thingy. Quite uncomfortable, but totally expected, what with six kids running around the house.

There was really no sense of drama here, romance-wise. The two men were mature enough to get real and get down to the grind of raising kids. The grandmother was really the evil fashionista villain. She is just like a tick refusing to let go and just sucked their lives out of them with glee, derision and bigotry. This situation leads the men to just decide to go on a glorified vacation to Cash's ranch seals the deal for the grandmother to up her tyranny and the men to hold on to each other and their little family. Puke, dirty nappies and all.

Okay, so yeah. I was caught by surprise here. I was quite disappointed, but then again, it made me think this may just be the first book out of two or even three that may tell the tale of how these two men will work things out and settle the grandmother issue. Hence my rating. If the title just teased of something like Book #1 or Prelude or Prologue to an unfolding series, I would have been glad to rate this a 4. But there was none of that.

Don't get me wrong, I am a total fan of Sean Michael and I did enjoy this. It's just that this ending literally came out of nowhere and now I am stuck. Stuck in the wonderment of how all this will play out. I got teased. That's how I felt. Teased. But then again, my curiosity meter is up and pinging and I just want to know two things: Is this the End? Is this just a taste of more to come from these men and their new insta-family?
Posted by multitaskingmomma at 1:30 AM