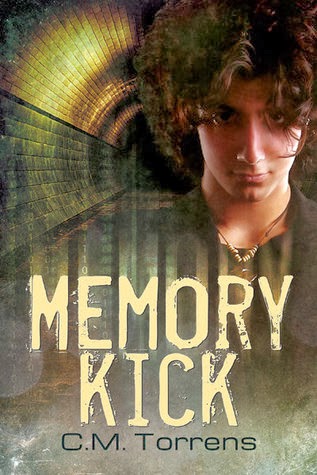 Lost and missing his memory, Qusay Drazi turns to the drug kick to ease his pain while warming beds to feed his addiction. His years on the space station have taught him nothing is free. Meeting Cameron, who seems to have no ulterior motives, leaves Qusay confused but hopeful that Cameron is different. When Qusay finds the courage to ask for help, he discovers a price on his head for the locked away memories.

Cameron Miles believes people can turn their lives around, but his attempt to help Qusay unravels a slew of trouble, and they find themselves on the run from the CompCore corporation. When CompCore captures Qusay, Cameron realizes how much his feelings for Qusay have grown. Then he discovers what CompCore is after and how deeply it is buried inside Qusay’s mind. Cameron must decide how far he’s willing to go before the memory “treatments” leave Qusay a tattered and empty shell.

Although I was not familiar with C.M. Torrens' works, reading the blurb for Memory Kick piqued my interest. There is nothing like a blurb that tells of a different story. As this is a science fiction, I just had to have this.

It was quite intriguing reading this book. The first chapter tells of an addiction and mindless sex, no thanks to the drugs Qusay had taken. After reading that chapter, I was ready to put this down, to be quite honest. As I am not usually a quitter by nature, I decided to persevere and grit my teeth. I thought this was just another one of those things and nearly regretted my choice. 'Nearly' being the operative word.

The story started to unfold and introduced us to Qusay without his mindless escape. In him, we find a character in so much pain and without memories. This made me curious how he got involved in the lifestyle of drugs and prostitution if there was no real backstory. This is when the title, Memory Kick, kicks the readers.

In comes Cameron. Bounty hunter by profession, he sees in Qusay a young man ready to be saved. Getting to know the young man, he gets curious on the whys of this individual. His lifestyle and profession were at odds with his whole personality. In a search for truth, the two men agree to search for the backstory. This is where the real fun begins.

The suspense of being hunted and running to safety, the mystery of Qusay's past, it is all so brilliantly told by the author it was hard to put this down. After that first painful chapter, it was impossible not to get sucked into the mystery that is Qusay.

As their running bring them to dangerous grounds, the characters begin to evolve. Cameron seeks to save Qusay who now finds he is not who he is. He is a victim of a mind wipe and the mystery unfolds just as their love for each other strengthens.

This book is a fantastic science fiction and the mystery and suspense were a bonus to the reader. Hard to put down, impossible to forget, the emotions this book can bring out from all of its readers make this a unique work. Yes, it could be quite painful to read at times, especially with the sensitive topics involved, but these were so very well handled by the author that there is no room for regrets.

Fantastic!
Posted by multitaskingmomma at 4:00 AM