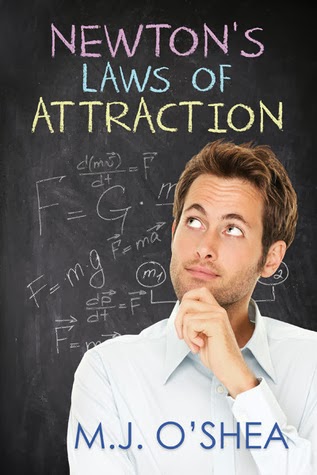 Rory was Ben's oldest and best friend until senior year of high school, when they confessed they'd harbored feelings for each other all along. They enjoyed only a few months of happiness until Ben chose closeted popularity over true love… and he's regretted it ever since.

Eight years later, Ben is out and proud and teaching art at the same high school he graduated from. When he learns the chemistry teacher is retiring, he's excited to meet her replacement until he finds out the brand new teacher is none other than Rory Newton—the first love he's never quite gotten over. Despite a painfully awkward start, it doesn't take Ben long to realize he'll do whatever it takes to win Rory back. But it's starting to look like even his best might not be enough.

MJ O'Shea's title, Newton's Laws of Attraction, immediately gets any reader to think this is a story involving some serious attraction between two men who may or may not resist said attraction. A law like this can never be repealed nor changed. It is as it is and resistance is futile.

Ben, as the blurb suggests, meets Rory after eight years of separation. He has finally come to terms with his sexuality, is openly gay and proud of it. His circle of friends accept him at face value and his students love his class, respect him as a teacher and as a coach. When Rory comes back into his life unexpectedly, the laws of attraction that had been holding them since day one back when they were only seven, grips him.

For Rory, he is resisting any and all forms of attraction to Ben. His painful past with his one-time bestfriend and boyfriend has scarred him deeply and he is unwilling in every way.

But the laws are laid down. The attraction is set. They are, and always shall be - should be - together. As said, resistance is futile and continuing to do so would only cause pain.

When reading this book, I could not help but be pleasantly surprised that such a heavy premise came out to be a very, very light read. It was light, it was fast paced, the plot developed very well and the characters evolved from childhood, to stupid teens to mature adults. It was such a pleasant read for such a short story. Well, it's really not all that short being 176 pages, but it seemed that way. When the end came, it left me with a sense of fulfillment and a goofy smile on.

It hit just the right spot for me and it was very romantic.
Posted by multitaskingmomma at 10:45 PM