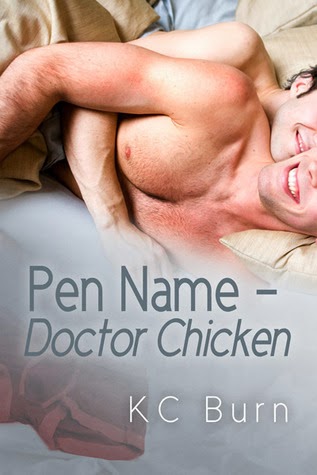 Sometimes Stratford Dale feels like Doctor Chicken consumes his life. It’s his pen name for a series of wildly popular children’s books. They were his brainchild; he meant for them to be a way to pay his many bills while he pursued his dream of publishing graphic novels. But the Doctor Chicken contract was a raw deal. Instead, he churns out book after book for a pittance, leaving him broke and no closer to his dreams.

Stratford’s dreams of love have fared no better, but he’s still trying. After yet another disastrous date, he’s intrigued by a man going into a cooking class—so he takes the class too. Vinnie Giani is a successful, self-made man who is charmed by Stratford’s bow ties, sharp humor, and clumsiness—which leads to an opportunity to take Stratford in for stitches. Vinnie is, above all, responsible, having taken on the care of his mother and sisters from a young age. Perhaps it’s natural when he begins to treat Stratford more as a child who needs a parent than as an equal partner. But when Vinnie tries to “fix” Stratford’s career woes—including the Doctor Chicken problem—and ends up making the situation worse, their fledgling relationship may not withstand the the strain created by blame and lies.

Pen Name - Doctor Chicken is a title that grabs attention. The blurb pretty much closed the deal for me and I sat down to enjoy what I hoped would be a happily ever after light read. What I got instead was exactly what the blurb tells us, and then it ends with a happily for now. Not even a contented for now.

I honestly did not know what to do with this. There were times I just put this down as the plot would go smoothly one point, go off the tracks at another, get back on the track and so on.

Let me state first what gave me some problems.

Stratford is as prickly as a sea urchin. Coupled with his fierce sense of independence and indecisiveness, he was quite a hard character to like.

I did not know what to do with Vinnie as a character. On one hand he's a really great, loving, supportive guy on the other, he is manipulative and at the most ridiculous times, domineering. His character was not so well developed, I know his being a loving and supportive brother and son was well written, but his business side was left a bit - off. The lack of information left me a tad lost on what to think about this man. For someone who was portrayed as pretty astute, he sure missed a lot of signs and messed up a bit, especially that last bit.

There was a bit of focus on two minor characters who were simply mean to Stratford but they disappeared into the plot. Then there was another important aspect: the job as Doctor Chicken. Last chapter opens and he loses his job. That is it. No elaboration, nothing.

The redeeming factors were there, as this is a very nice romance on the cheesy and uber-morantic side. Vinnie did the best he could do to 'win' this intriguing man he had first spotted staring into that cooking class he had been attending. Stratford came from a traumatic past from being a spoiled only child to a homeless kid kicked out of his home by his religiously fanatic parents. He made it on his own, is a survivor but he is very, very insecure. When he meets Vinnie, the doubts are there always at the back of his mind which does not do anything to positively contribute to their fledgeling relationship.

Obviously there are a lot of good things that could have gone good with this story, my personal view is that the unresolved issues within the plot left too many holes for me to truly appreciate this story. For a light read, it is okay, if you like happily for now endings.

I just wish, well you know what I mean.


Posted by multitaskingmomma at 5:02 AM