Review: Scourge (The Chronicles of Old Town #1) by Etienne 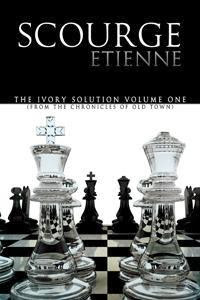 When two young men set up an amateur sting to expose a pastor's pedophilia, they gather plenty of evidence not just of the pastor's predilections but of something even more sinister. Out of their depth, they call in FBI experts to investigate.

Meanwhile, Clint Buchalla, investigative reporter for the Washington Ledger, is sent to Atlanta to interview a man about his top-secret study. Clint is so angry at his editor for cutting his vacation short that he gets drunk and winds up in bed with the man he was supposed to interview, Dr. Rodney Poucher. But it’s exuberant grad student Lucien Cormier, Rod’s houseboy with benefits, who really captures Clint’s attention… when he isn’t busy investigating the sharp drop in birth rates in metropolitan Black and Hispanic communities.

Rodney’s findings lead him, Clint, and Lucien to a meeting with the deputy director of operations of the FBI. But they only have so much time to figure out what’s going on and arrest those involved—and for Clint and Lucien to work out whether the spark between them can span the distance between Atlanta and DC.

Scourge is the first of The Chronicles of Old Town series by Etienne. It is really the story of how one investigative journalist, Clint, finding himself in the middle of a huge story. Unfortunately, he has to sit on it until the powers that be, including the FBI no less, finalize their investigation and approve the release of said story.

The plot starts out simply with one of the more commonplace scandals that seem to rock our world today: pedophilia. It involved a pastor and two men who take it unto themselves to finally put an end on this Bobbin' Bobbins sexual proclivities. Their stunt works, but then it also opens the doors to a darker, more sinister and dangerous secret involving white supremacist movements that may just be equivalent to The Holocaust.

The white supremacist movement, through some complicated twists and turns, managed to place unknown substances into some popular sodas that were very popular amongst the minority population. Catching the eye of the CDC, it managed to significantly decrease the population growth of the minority groups to almost zero. This is when we readers realize just what The Ivory Solution means: when minor groups are slowly made extinct and the Caucasian groups see a rise in their population trends.

Scourge is the first volume to this frightening tale of sexual slavery, pedophilia and white supremacy activities. Clint Buchalla finds himself sitting on what could be the hottest story of the decade. As he weaves his way through the web of deceit and manipulation, he meets Lucien.

Lucien is, in fact, a student who has an obsession with cleanliness and loves to cook up some of the more delicious Cajun cuisine described on paper. He is also someone who is not shy to express himself and soon gets involved with Clint not just in the housekeeping way but also in between the sheets. Soon, however, Lucien learns that being with Clint completed him and made life easier. Clint, in return, for the first time in his life, finds companionship, and finally love. Love is something which had never bit him before so this was quite an eye opening and life changing event for him that he is not about to let go of Lucien.

Scourge is first and foremost a mystery involving some of the more complicated tasks of investigative journalism. Weaved within the story is a romance that does not hit the Scorching Hot rating for erotica. I would place this at about a two (2) at most, and yet the romance between the men is tangible and real. So yes, contrary to the author's claims that he does not write romances, this is a beautiful romance that slowly evolves from pure fun to the forever kind of love.

On an aside, in this story, we also get to meet the boys of The Burdens of Truth (Avondale Stories #6), David and Paul. Clint meets, gets to know them and finally become friends with  the young men and their dads. Later we we will discover that it is Clint who will finally get the chance to write their story and publish it as a novel or The Burdens Of Truth as we read it.

I first read this book last year when it was first released and I absolutely loved it. When I found that the second book, Cleanse, was released, I discovered that I needed to read this once more to get the story straight and fresh in my mind. This second read was just as enjoyable but more intense as I found myself seeing more details that I surely missed on that first and rushed read.

For those of you who like mysteries and investigative journalism  with just the hint of romance in your stories, Scourge is that book to pick to be followed quickly by Cleanse - which I will do now!

Note: I got really hungry while reading this book. The Cajun cuisine described here just sent my mouth to water in the middle of a great mystery which can be a bit distracting. I finally just put down the book, go to the grocery, get some andouille sausage and cook up a pot with chicken legs. Good thing we have this readily available here and yes, it was a hit!
Posted by multitaskingmomma at 4:44 AM