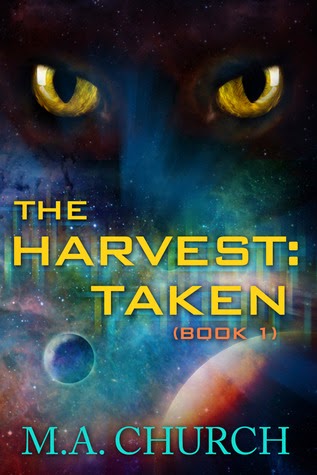 In the year 2050, humanity finds out they are indeed not alone.

Massive space ships appear without warning above the capital cities of all major nations. The planet Tah'Nar is dying. Chemical warfare has reduced the once-intersexed warrior race to sterility. They need fresh DNA in order to reproduce and have an idea for a harvesting program... and so they turn to Earth.

Earth governments negotiate a lottery, and Dale Michael assumes he's safe since he's under the Harvest age limit. How wrong he is. He's illegally harvested and claimed by Tah'Narian starship captain Keyno Shou. From the moment Keyno sees Dale, he knows he must claim the spirited human male for his own. What he doesn’t expect is a spitfire with a mind of his own—and a deadly disease that will require a risky procedure to cure.

No matter how this book turned out for the best, it does start off with abductions and drugging so there may be a few readers out there who may need this warning. It also tells the tale of a government that lies to its people. In this futuristic world of Earth, we have cat-like aliens coming in and offering some of their technology in exchange for mates. Thing is, the species is intersexual and the local homophobic politicians decide it is not to the best interest of the Earthlings to know that what these aliens seek are male homosexual mates. Something which the alien race disagreed to but had no power to change. And this is where Dale comes in.

Dale is under the age requirement for the harvest of these mates but he finds himself forcibly taken from his family and on board an alien ship mated to the ship's captain, Keyno. He also finds out that his previously harvested best friend is onboard and mated to the second in command. His life adjusting in this alien society and getting a double dose of their DNA was a bit hard but he is a survivor. Only thing is, he is now expected to bear Keyno's young.

The only problem I have with this is that this is obviously only the first part of the tale. According to some of those who have read this prior to publication, the second half of the book will hold the final key and elements that will make this story whole.

For those who like mpreg stories and alien loving (like I do) Taken is one of the best reads to consider. Not once was my focus taken off from the unfolding story and surprisingly, this is quite a light and fast read. I will now have to anxiously await (once more) for the sequel of a truly interesting tale. Especially when the mpreg elements are going to be on full force.
Posted by multitaskingmomma at 5:29 PM