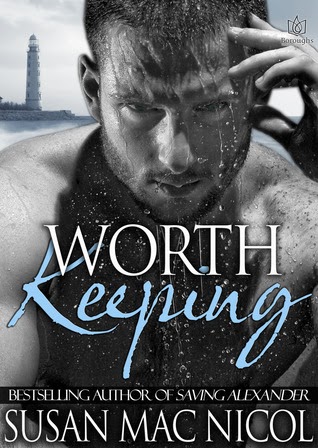 Abused horrifically as a boy, Nick Mathers has come to terms with his existence as a man. Mostly. Other days life seems a little much. Especially when Nick knows he’ll always be alone.

On those days his thoughts turn black. He walks the Norfolk coast and considers the frigid embrace of the waves. And then, one stormy night, he finds someone who’s tasted just that. The beautiful stranger on the beach is near death, and Nick rushes him home to slowly nurse back to health. As he does, he finds a love unlike any other. Owen Butler’s body is as warm as the sea was cold, his heart as big as an ocean. And Owen is a man who swears to repay the favor. Nick can yet be saved from himself, and he will see that he is indeed a man…

A word of WARNING: Although this is first and foremost a story of romance and survival, this is also a very dark book. There are references to sensitive topics like assault and battery, pedophilia, rape, and suicide attempts.

I was at page one and the visuals of the story playing out was just - - - - freakish, for lack of a better word. I am completely astounded. As the words continued to spill, so did the mental images. It was like reading a movie play out in front of me. And the cold of the sea spray. How did the author do this? I've had this type of reaction before, but only from  a handful. A loose handful.

I had trouble wrapping my brain around this one. There were events that hit deep inside and it was difficult to focus without recalling horrific injustices done to children.  Having worked with many pediatric cases, including abuse, it was very difficult to separate Nick from them. The author researched well, it is pretty evident from the start. Thing is, this did no read like research. It was an intimate peek into the mind of a survivor, the feelings of despair and a very, very low value of self-worth.

The romance between these two men was hard to take. For those who are not familiar or privy to such pain, it can be hard to imagine. And yet, I found myself sinking into their romance. Fought the battle with them and cheered them on.

Though I did say this is a dark book, there were a lot of lighthearted moments. These were just so typical of men. I found myself laughing hard to the Daddy Do-Gooder and the weapons of mass destruction. Those were brilliant! Reminded me of some stuff sold on Amazon. hehehehe The Snake Oil reminded me of some Ninja moves. Sorry, it was just so hilarious.

There was also the fantastic group of friends who were such a surprise I wish the author would just give us their very own book. It would be a blast to have to read Daniel and Justin. And of course, who could forget about Don? This one. Wow. He just made me cry. His was a heart of gold.

But it was really Owen who showed Nick. That he, Nick, was deserving of all the good things life could offer.

I have to reiterate that this book is or may not be for everyone. That said, it is a beautiful story of survival. It is a story of two men who fought for their lives and there are times they can trip and fall, but somehow they do manage to pick themselves up and face life. Embrace it. Enjoy it. Love it.

Show each other and the world - they are both Worth Keeping.


One bit of advice: it is best not to rush reading through this. This is a book, a story, that cannot and should never be rushed. It has to be thought over. Savored. Read it, and see what I mean.

Some of the proceeds for this book are being donated to the NSPCC -National Society for the Prevention of Cruelty to Children.