Home for the Holidays
Lori Toland 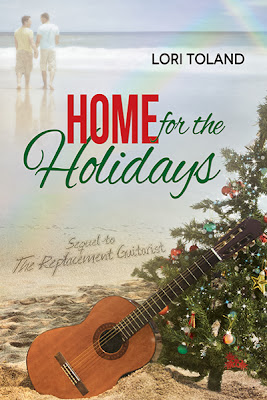 Jason Stockton and Blaze Shinozuka are looking forward to escaping their hectic rock and roll lifestyle for a relaxing holiday. Their plan seems promising, and the passion between them burns hotter than ever as they keep each other warm despite the icy temperatures.

When a surprise Stockton family get-together threatens to reveal what Jason would rather keep hidden, their budding relationship is put to the test and an impromptu trip to Hawaii makes the differences between them more obvious than ever.


Thanks to two chaotic family holidays and a lot of painful secrets, Christmas could end up being more than their new found love can
endure.

When Blaze reached the street, a horse drawn carriage like the ones he’d seen in Central Park was parked in front of the restaurant. Jason gestured for him to get in and he cocked his eyebrow. “A horse-drawn carriage. Really?”

Jason grinned. “I’ve always wanted to go on one but I’ve never had the chance to.”

“You’re kidding, right? A hot guy like you couldn’t rope a date into going with you?” Blaze teased.

Jason ducked his head. “There wasn’t anyone I wanted to take with me before you.”

Blaze grinned, honored by the gesture. “Really? Well, then I feel special.”

Jason got in and offered his hand to Blaze to help him into the carriage. Blaze smiled, getting in and settling down onto the leather seats. “Are you sure it’s okay for us to do this?”

Jason frowned. “Why wouldn’t it be?”

Blaze shrugged as Jason settled into the seat next to him. The driver gave her order to the horses and they set off. Once the carriage rolling smoothly, she glanced over her shoulder at them. “There are some wool blankets if you need them. It’s supposed to snow tonight.”

Jason reached for them but Blaze caught his hand. “I’m allergic to wool, Jase. Besides, I don’t think I need it. My coat is lined.”

Jason leaned over and whispered, “I think she told us that so we could snuggle under the blanket.”

“Oh… well, in that case….” Blaze grinned, and when Jason pulled back and returned the smile, a thrill of happiness ran through him. Jason threaded their fingers together, and tucked the blanket around their bodies, being careful so it didn’t touch Blaze’s bare skin.

Blaze looked around at the buildings as they made their way toward Central Park, the hoofbeat of the horses creating a rhythm of its own. Jason squeezed his hand through his lined gloves, and he looked over at his lover. “Having fun?”

Blaze nodded. “Are you?”

Jason reached up with his other hand and cupped Blaze’s cheek. “Yeah.”

He smiled as Jason leaned in. Their lips met in a gentle, unhurried kiss and when he pulled back, Jason trailed his gloved thumb over Blaze’s cheek. He leaned in again, and this time he slid his tongue in to meet Jason’s, and he moved closer to his partner.

Blaze felt something against his cheek, and he reached up to brush it away with his finger. Nothing could distract him right now, not when Jason sucked on his bottom lip gently. Blaze sighed softly, and reached beneath the thick material of Jason’s jacket to pull him close.

Something else brushed against his cheek. It must have been his hair and he tried to make a mental note to get a haircut, though Jason drove away the thought with another kiss. He felt the sensation again, and he pulled away from his boyfriend to brush the strands out of his face.

Jason looked toward the sky and his smile took Blaze’s breath away. When Jason looked back, his eyes were shining as the snowflakes melted along his impossibly long eyelashes. “Perfect,” Jason said softly.

Read Further Down For My Review!

Buy Links:
Home For The Holidays:

My Favorite Quote:
Jason held out his hand. “Take it and if I let go, I promise
it won’t be for long.”

The first time I read Home for the Holidays (1st ed.) was in 2011. Back then I was just starting to read the MM genre and I was still going over the books my friends told me about. After reading The Replacement Guitarist and fell in love with both Blaze and Jason, I had to get the second book.

I had held on to these two and both are in my older file folder of Favorites. When I got word that I had a chance to review book 2 I could not believe it. I thought this was just going to be a new release but when I opened and compared that first edition against this eARC sent me, I was surprised that not only was this book much, much longer, the ending was  totally different, too. It was like I was reading a different story. This made me so happy.

Okay, I confess, I did go read the ending first, I had read it before, right? So I was a bit intrigued when I saw the fantastic changes done to this old favorite of mine.

First off, the story, thanks to the revision and additions, took a turn for the better. Not only did the different ending make the story more complete, it was just plain better. While the first edition frutrated me no end for wanting closure, this one satisfied me no end and just left me panting for more.

Reading Blaze and Jason reaffirm their love for each other during the holidays, reading them go through the struggles of a budding relationship which lacked the chance of getting answers from the usual twenty questions, it was a very romantic read.

I liked how the two families, the Stockton and Shinozuka families, got on well together, despite their having started out on the wrong foot. Tutu was adorable and she really enlivened the story in her grandmotherly way. She was sweet and spicy all at once and there were times that she actually stole the show.

As for Jason and Blaze, well they were going through a relationship in Hollywood and thereabouts, within a society that preys on the players in the entertainment industry. Jason being a big player in this business and Blaze a rising star himself, they were open targets. The turn of the plot is when things get to a head between the two men and the pop diva Jason was representing and Blaze was contracted to play for. They find themselves in a place where they may have to rethink their future plans business wise. Fortunately, their relationship was solid.

And that is where it ends.

I was surprised at this turn of events for this is the part where Lori Toland gives us her surprise addition. But I found out that there is a third book in the making and probably will be released soon. This not only makes me happier, but I will finally get that closure I had long awaited for when I first read the two books. Now, I will sit back, let the romance and hotness of these two men wash over me and dream of that third book.

Is this a better book than that first edition?

Note: I had rated the 1st edition as 4 Stars as the ending left me hanging, hanging and hanging. It was frustrating not knowing what happened. As I said, this edition is so much improved and is just plain better. Review based on an eARC.

The Replacement Guitarist
Amazon
ARe
BN 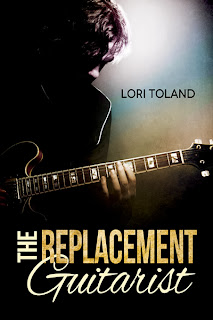