Review: Acts of Faith (Cost of Repairs #4) by A.M. Arthur 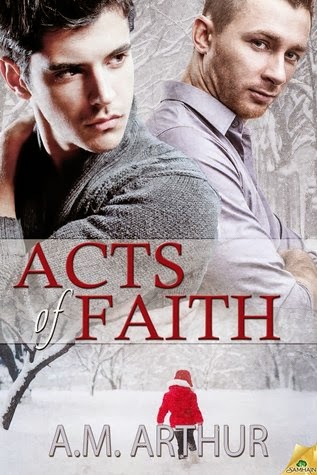 Love can be built on a broken past…but not on broken trust.

Rey King has settled into his new life with Samuel Briggs, and his catering business has taken off to the point he’s brought a business partner on board. Yet something is missing. He’s still haunted by the pain of losing his daughter, Faith, in a custody battle six years ago.

Then, one month before Christmas, Faith’s grandmother passes away, and Rey gets a shocking offer he never saw coming.

Samuel knew loving Rey wouldn’t be easy, but then again he’s no walk in the park either. Still, for eighteen months they’ve thrived as a couple…until a shy seven-year-old girl shakes his belief that he and Rey can overcome anything.

Settling Faith into their chaotic lives would be a welcome challenge, if things weren’t complicated by Rey’s too-cute, overly attentive new business partner. As misunderstandings, miscommunications, and unresolved tensions escalate, Rey begins to wonder if the best Christmas gift of his life could cost him the man he loves.

Warning: Product contains one overprotective (and slightly jealous) police officer, an angsty chef whose heart is in the right place (even when his actions backfire), and an adorable little girl who turns their lives upside down. Added bonus—hot man-on-man action and the inappropriate use of a washing machine.

After reading Cost of Repairs, that first book of the series where we first get to meet Sam and Rey, we loved the romance and how the two men were able to fight for their love and their lives. They were both survivors of hard circumstances even if life managed to send them curve ball after curve ball without seemingly stopping. After their story ended, there was only one thing left unresolved: Faith.

Acts of Faith opens with the death of the wicked mother-in-law who somehow managed to destroy a lot of lives while showing such a loving and caring facade. Finally, Rey can get Faith back. Unfortunately, it comes with a lot of prizes.

Faith's joyful coming into their lives was tempered by a spout of jealousy over a business partner. Throw in miscommunication, a sprinkle of childhood illnesses like allergies, a dash of work schedule messing up with the two men's sex life. Although all these added spice and a bit of drama into the story, these were not overly done and instead added realism to the story.

I had wondered where the title came into play while reading this. It seemed Sam and Rey were on the road to destruction if they both did not get their heads out of their buns. It was really their faith in each other and life itself that made them stronger as a couple and made them see their faults, accept these and just ride the ride of life. Turbulence and all.

With this book, we get a closure of what is Sam and Rey. We finally get their HEA which includes Faith. That little girl whom Rey had lost but now has regained.

We readers and fans finally have the resolution we all craved for. It was Real. It was Hard. But it was beautiful.

Posted by multitaskingmomma at 3:45 AM