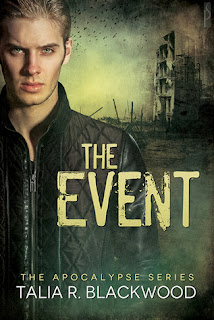 A mysterious event destroys the world and merges two adjacent realities. The Dark Ones are gathering and now more than ever, Lucian and Raide must fight for each other and those they love.

After an apocalyptic event—a devastating earthquake and acid rain—the world merges with a parallel reality. Atmospheric gases obscure the sun and strange entities haunt the night. A group of survivors start a journey to seek aid.

Lucian Seagrave, a city boy with aspirations of becoming a rock singer, discovers Raide, a former monk from the adjacent reality. Raide reads auras and knows Lucian is fated to be his soul mate.

But the Dark Ones are lurking. As any hope to find help fades, Lucian and Raide learn they have to fight for each other and those they love.I am a huge science fiction fan as well as a Stephen King one. Reading apocalyptic novels rarely take my fancy but when one catches my eye, then I put down everything and just read. I hope I get a good read out of these and mostly I do. Other times I don't. 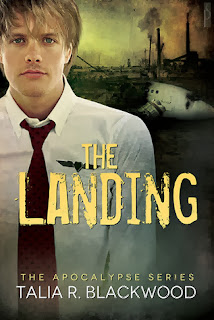 In a ruined world, where the darkness spreads, monsters roam, and all hope seems lost, can dreams still come true?

An apocalyptic event hits the world. Jet pilot Adrian Melser is forced to emergency land; his jetliner crashes in a place beyond recognition—a collision of different realities—where poisonous gases obscure the sun and monsters haunt the night. Adrian still has to take care of his surviving passengers.

Paul Mendoza sees the plane landing from the prison he's about to escape from. Under the order of Ghost, a serial killer eager to create his evil empire, he assaults the airplane and enslaves the captain.

Despite violence and oppression, Adrian understands Mendoza is special. The criminal is the man he has always wanted at his side. But a sad past has hardened Mendoza’s heart, and Ghost can't tolerate losing the most charismatic of his followers.

Harsh reality is not for dreamers. All seem lost. But Adrian wants to preserve hope and fight for the man he loves.

This Christmas break, I decided to take my chances on Talia Blackwood's Apocalypse series: The Event and The Landing. Both are set in a world where an apocalyptic event surprises everyone and then those who survive, disappear. Only a handful survive and in the course of their seeking food and shelter from the weird occurences going on, they meet young girls, gay men, some older tourists, some really evil weird individuals and criminals. They seem to be coming from different times as well. Basically, the event causes a disturbance in the time-shift continuum causing time and space to go haywire and leave in its wake a totally different world filled with dangerous Dark ones, acid rain, phages, killer moths and poisonous green gas. These handful of survivors have one thing in common: they all seem to be bright, pure, innocent and honorable.

As I was reading these two books, I could not help but feel the plot was familiar somehow. -I knew I was not just thinking specifics but then I remembered. I went to my library of paperback and hardbound books, I spotted it: The Langoliers by Stephen King. I went through my extensive DVD collection I spot the two movies: Where Have All The People Gone (1974) and Vanishing on 7th Street (2010). I recall watching the Langoliers on TV when it first came out as well. Now that that is settled, I just decided to read these two novels as from the eyes of the author.

Why? Well, for all of the post apocalyptic disastrous action and events going on here, I thank the author for NOT! giving us any ZOMBIES! Thank you! If zombies were part of the plot, I would have included Night of the Comet in my list and just dropped this series.


We have an ex-monk-novitiate, a future rock star, a hero pilot who was not and a supposed criminal who was actually an innocent. This is their story of survival in a dystopic world gone terribly wrong and finding the love of their lives.

There were a lot of tense scenes here like the men having to deal with a serial killer and his ghosts or having to dodge the killer jelly fish or moths that melt the flesh. The attempted rape scene was quite intense until it was stopped when Mendoza risks all to save Adrian.

So I do see where the author may have come from in terms of plot and events, but the stories of the men involved and the things they had to go through were not only original, but worthy of a dark sci-fi dystopic novel. These were quite hard to put down.

The two stories read parallel to each other so can actually be read separately or without seeming order. Both books start on a parallel time and end before the men of book one meet up with the men of book two. Each story tells of the fight for survival. Each book ends on a question of: what do they do now?

For those of you who like dystopic, action packed, sci-fi books sans the zombies, this is a great book to read and enjoy. I did.
Posted by multitaskingmomma at 2:09 AM