Review: The Backup Boyfriend (The Boyfriend Chronicles #1) by River Jaymes 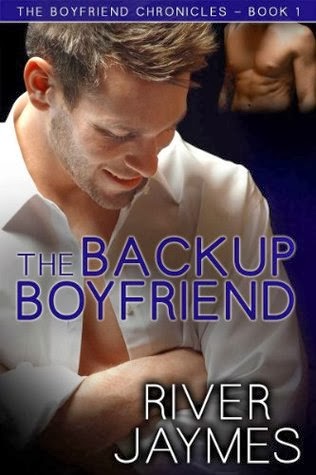 Professionally, Dr. Alec Johnson has almost reached his goals. As this year’s recipient of a humanitarian award with his ex, Dr. Tyler Hall, Alec’s work with the homeless is about to be recognized. Unfortunately, his personal life sucks because now he has to attend several events alongside Tyler—with his ex’s new boyfriend in tow. In an attempt to lift his mood and break out of his rut, Alec purchases a motorcycle he has no idea how to start.

Dylan Booth doesn't have time for Dr. Clueless and his fickle 1964 Harley, but the cocky mechanic can’t say no to the request for help. Having spent his teen years on the streets, and losing his best friend to HIV, Dylan decides teaching the do-gooder how to ride is the least he can do. But watching Alec flounder in his ex's company throws Dylan into protector mode, and the confirmed hetero introduces himself as Alec's new boyfriend.

The ex suspects Dylan is lying.

And Dylan’s not sure he can fake being gay.

But he’s a master bullshitter, and the phony PDA soon turns ultra-hot. Alec can’t afford to get attached, and Dylan’s learned everyone eventually leaves. Unfortunately, playing the backup boyfriend is starting to feel way too real…

I just finished this book and I have the biggest smile, grin, whateveryoucallitsmile on my face it literally hurts. Seldom do I read a first time author (in my case at least) and get this amazing feeling of pure satisfaction. Thank you Eli Easton for this recommendation!

At first read, The Backup Boyfriend is most likely what the blurb does tease the curious. One would assume, incorrectly mind you, that this is just another gay-for-you romance with a wham-bam-tango-in-the-sheets-erotic-mindless-short-light-read. At the end of the book, the readers will just feel that they had got to be that fly on the wall, observing this great romance evolving from friends to lovers to the forever kind of love.

Alec was left off on to the side by his partner of two years. Floundering and depressed, things just got too much to handle when he finds out about and meets the one who replaced him. On the spur of the moment decision, he buys a Harley of all things and finds out, too late, that he may have Wiki-knowledge at his fingertips but not the necessary know-how on how to ride or even manage this huge monster of a ride.

In comes Dylan. He is a rough, devil-may-care and very, very, VERY! straight guy. They are complete opposites of each other but for two things: the Harley and Noah. When the ex-boyfriend manages to get Alec into a panicked mess, Dylan's protective instinct kicks in and becomes the boyfriend. The backup type.

Okay, so all seems fine even if no one really believes the relationship is real, one thing does lead to another and they kiss. Dylan is so taken by that kiss which soon turns to a tango between the sheets that is just too HOT HOT HOT! to even write about in a review. I will leave you readers to enjoy fanning yourselves whilst reading that scene. Whew!

Their relationship is really rocky, at best, and both are tip toeing around each other most of the time. One thing is certain: their chemistry is just sizzling no one seeing them together would ever doubt there is nothing going on. Thing is, Dylan has been more than just hurt in the past, and Alec is not sure he knows how to handle it the right way. Factor in the Dylan quirk: he does not want anything to do with labels. Of any kind.

This book is 225 pages long but it was a light and fun read that when the end came? OOOOOOOH! I just wanted to stomp my feet. I really did not want this to end. Rarely do I read anything light where I don't want it to end.

Highly entertaining. Very, very romantic. Can be TOO HOT! to handle. I recommend it. Truly!

Posted by multitaskingmomma at 1:41 AM