Review: The Bodyguard (The Artifact, #1) by X. Aratare 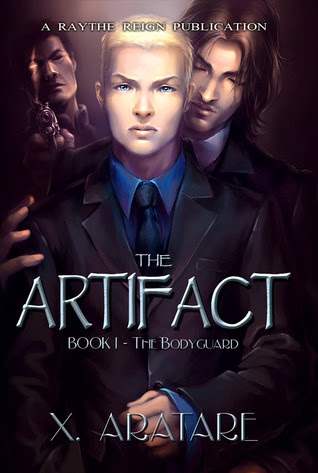 The Bodyguard (The Artifact, #1)
by X. Aratare
Published August 29th 2013 by Raythe Reign Publishing
B&N, Amazon
My Rating: 4 of 5 Stars

Dane Gareis is a wealthy, reclusive young man with a traumatic past, but a spine of steel. When his father is killed in a mysterious plane crash, Dane carries on the family business and continues his passion for the very antiquity that got his father murdered — a golden sarcophagus belonging to an ancient cult known as the Ydrath.

Soon, the Ydrath threaten him as well, and Dane seeks to hire a bodyguard he can trust. Someone who can protect him, and someone who will respect his boundaries. While he gets the first two, the third requirement falls apart when he hires Sean Harding.

Sean Harding is an ex-detective with a sixth sense for danger. After his entire unit was murdered in a drug bust gone very wrong, he is a broken man who thinks only of revenge until he takes the job protecting the Gareis CEO.

Sean’s attraction to the vulnerable Dane gives him new purpose, but his past is not escaped so easily, and his sixth sense tells him that there is more to the Ydrath than even Dane knows.

I have been reading a few MM science fiction books these past few days and only one or two have managed to capture my imagination to the point where I had to send a PM to a friend and told her she must read this.

The Bodyguard by X. Aratare had a blurb that captured my imagination. I was wondering how a billionaire/bodyguard plot could play out as a science fiction/paranormal. Surprisingly, once I started reading this is a book, I could not put down. It was intriguing, it was gripping, it was suspenseful, thrilling and really, quite scary!

This is the story of Dane, a young man who suddenly finds himself in a position of power after the sudden death of his father. He and his personal guards know the accidental death was, in fact, a murder. How could they report that the murder was linked to a thousands old previously unknown culture called the Ydrath?

The Ydrath were a cult, a people, who supposedly populated the world way before our known history. As there was no written records of their existence, obviously no one knows about them. A discovery in a probable oil site uncovers a huge tomb where a golden sarcophagus lay. As it was taken from its resting place, all those that touched it, knew of its existence, died under mysterious circumstances.

Sean Harding was a brilliant police detective whose whole team investigating a deadly drug were eliminated under mysterious circumstances. The only survivor to a drug bust gone wrong, he finds himself out of work and without friends. The only thing left was something inside him.

The changes brought about on his body by the very drug his team was trying to uncover and stop, left him with superior strength, an almost perfect vision, self-healing powers, without need for sleep and some unsettling and terrifying hallucinations. What was even more scary was these hallucinations may not be hallucinations at all.

When he is recruited to protect Dane, he finds himself unable to refuse and the urge to protect the man. With his life. This is not how Nick is. Thus the start of the mystery.

But the action sequence, the mystery, and the terror of the monster. These were very real and quite scary. Horrifying.

And then it ends.

Instead of feeling frustrated and mad about how this book ended, it left me with a feeling that I must know what happens next. I want to know what this monster is, what this Ydrath is, where the romance of Dane and Nick is going. I am scared to read the second book and yet I must know!

This is the first I have read of X. Aratare, the MM pseudonym of Raythe Reign. This is not the last. I will look out for that second book.