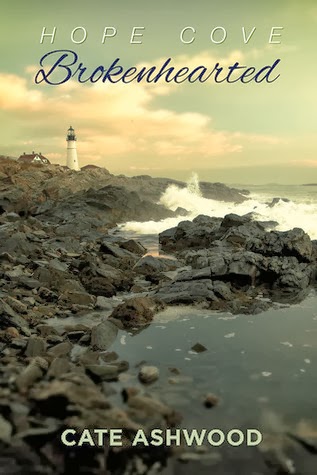 Oliver Parrish has been alone in the world since he was born. So when Sheriff Owen “Mack” Macklin shows up on his doorstep to deliver the news that Oliver’s sister has died, he’s beyond surprised. Still, Oliver returns with Mack to Hope Cove, Maine, hoping to get to know the sister he never knew he had. As he tries to snap these new elements into his solitary life, he’s not sure how they might fit.

His life is shaken up further as he falls in love with the irresistible town of Hope Cove, and with Mack, its equally irresistible sheriff. But when he receives devastating news about his sister's cause of death, Oliver doesn't know whether to stay and fight for love and a good life, or cut his losses and run.

When I first saw the title to Brokenhearted, my first assumption was that Oliver suffered from a broken heart after going through a romance with Mack. This was so far from what this book is truly all about.

Oliver is a sous chef. He learned from the best but never from school. He may have the talent, but as he does not have the diploma nor the letters after his name, he will always remain a sous chef. A bit depressing, but he is used to it. He is an orphan, had been through the wringer of foster homes, and had been on his own ever since he became legal. He never thought he would ever have a family nor meet someone who could complete him.

Mack came searching for Oliver when his best friend, Maggie, died. Maggie had been in search of her biological mother and found, much to her delight, that she had a brother. However, before she could contact him, she died mysteriously. Mack came to tell Oliver the tale. This is the beginning of Oliver's heartache. What he had been searching for all his life was finally realized, only to have it taken away.

Learning that Maggie had left her bakery and possessions to Oliver, he takes a chance and goes to Maine with Mack. In the village of Hope Cove, Oliver gets to learn what a loving relationship could be and an accepting community could offer.

Then the axe falls and Oliver is Brokenhearted.

The story of Oliver and Mack was a journey to learning, acceptance and love. The pitfalls life offers up to both men were devastating, but as they say, there is always a light at the end of the tunnel.

This is not just a story of a romance between two men, it is a story of two men and a community who are out there to help each other out. It is also a story of hope. A bit on the heavy melodrama, but it was a beautiful read. Beautiful.