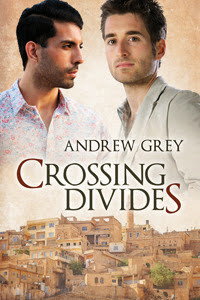 Carter Hopkins is on a mission. He has already written about the conflict in Syria, but is determined to go even deeper. With his editor’s help, he joins a band of freedom fighters led by Jalal. But it is Jalal’s brother, Nemat, who draws Carter’s attention. Nemat has left the family olive grove to join his brother in fighting the Syrian government in Aleppo. When Carter saves his life and is declared an honorary member of the family, Nemat couldn’t be happier, even though he knows his family will never understand his true interest in Carter.

Carter and Nemat say their goodbyes after the end of the assignment. Carter’s stories garner a lot of attention, but he can’t stop thinking of the man he left behind. Then rumors of the use of chemical weapons give Carter another chance at a story, and he jumps at it. But much has changed in Syria, and any chance of getting Nemat out of harm’s way seems more impossible than ever.

This has got to be my favorite Andrew Grey book. Ever.

Nemat and Jalal's situation plus Carter's determination to hold back his feelings to protect Nemat made me cry.

The story of Carter going back to Syria to find out if Nemat made it or not reminded me a bit of Dith Pran's story.

It probably has something to do with the TV tuned in to CNN practically 24/7 in my house that caused this book, Crossing Divides, to have such an impact on me. I saw when news first broke of the first days of the Syrian upheaval, the discovery of the mass graves, and the media and political furor over the whole sarin gas debacle.  I cried seeing the bodies of whole families fall to the poison their government threw at them. I still see it now as I write, the Backstory CNN insists on showing us. So yes, the story of Carter and Nemat hit me like a sledgehammer.

This story is not so much a romance as it is an unexpected peek into the lives of a people in the midst of a political crisis. Andrew Grey is very convincing in this writing. He was able to show us, through his words, the unforgetable images of a western journalist and the plight of Syrian people through their conversations, the development of trust between Carter, the freedom fighters and eventually with Nemat's family. The feeling of boredom laced with anxiousness settling when in the midst of waiting for something to happen. The gut-wrenching fear that rises in us readers when violence suddenly bursts into a scene. Then the ultimate desperation of a man thinking he may lose the love of his life and a people who know they have lost their country.

This is just incredible.