Review: The Enlightenment of Daniel (Sex in Seattle #2) by Eli Easton 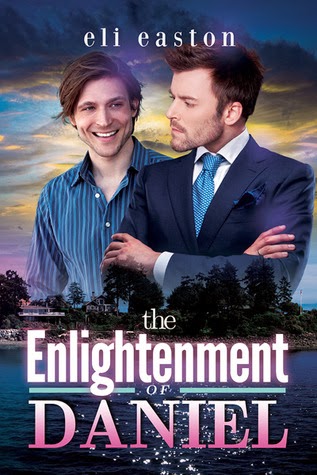 The Enlightenment of Daniel (Sex in Seattle #2)

Business tycoon Daniel Derenzo lives for his work until his dying father reminds him life is short. When Daniel starts to reevaluate his world he experiences a startling revelation—he’s attracted to his business partner and best friend, Nick, even though Daniel always believed himself to be straight. In typical type-A fashion, Daniel dissects his newfound desires with the help of the experts at the Expanded Horizons sex clinic. He goes after Nick with the fierce determination that’s won him many a business deal.

Nick Ross was in love with Daniel years ago, when they were roommates in college. But Daniel was straight and Nick patched his broken heart by marrying Marcia. Two kids and fourteen years later, they go through the motions of their marriage like ships passing in the night. But Nick’s kids mean the world to him, and he’s afraid he’ll never get joint custody if they divorced. If he can trust his heart to an awakening Daniel, they all might find their way to a happily ever after.

I like reading a book where once I reached the end I just felt good, satisfied, happy and giggly all over.

In  The Enlightenment of Daniel we have two best friends and business partners Daniel and Nick. Somewhere through the years, they were still best friends but they had both lost track of their personals. They had dug in too deep into their business affairs and got lost within the numbers and success. When Daniel's dying father had an epiphany of sorts, he calls on his son to start living his life and find true happiness. That was the beginning of the series of epiphanies collectively called Daniel's enlightenment. One of these epiphanies was finding out that his best buddy is very unhappy and now he just wants to get rid of the source of unhappiness and squash it. That source happens to be Marcia, Nick's wife.

One huge complication: Daniel is supposedly straight. He thought so. Everyone thought so. A startling realization hits him straight in the groin and he realizes right then and there: he must be gay. Does this slow him down? Does this drag him to the deep end? On the contrary. He just grabs this new information and uses it to his advantage. Let the fun begin!

Daniel is a shrewd and merciless businessman and his enlightenment showed him that getting Nick back into his personal life will make both of them happy. So he goes on a takeover bid that will make or break both of them. You see, Daniel realized he was in love with Nick.

As epiphanies go, Daniel's approach to these new revelations is hilariously businesslike. He gathers all the raw data, gets deep into research, weighs the pros and the cons then attacks mercilessly and goes right for the jugular. And really, this is how the book flows, like a business deal - but not.

Despite how this all sounds, this was a very fun read. Daniel's approach to life being a gay man was ridiculously egotistical and yet he was adorable at the same time. True, Nick was married, but he has not been in bed with wife for several years and had actually wanted a divorce a long time ago. Using his beloved kids as the ace to keep him under her control, Nick was just plain trapped. When Daniel and he finally admit their love for each other, Nick stepped aside and lets his shrewd business, now future life partner, take over the Marcia situation.

Tony of the first book waves his magic investigative wand and comes up with the solution to all their problems. The result: all parties involved get their heart's desires and get to eat cake, too. Of course, there was a bit of drama laced through all this, but it was negligible and just gave us a lighthearted romantic book.

To put it plainly, this is a very light and very romance and yet it was far from cheesy. It just was a great read that left me smiling really, really bad. These two men were gorgeous, inside and out. Their relationship was a long time coming and it could have all gone south fast. In the end, even Marcia had an epiphany and had her chance for an HEA. Daniel and Nick had trusted and loved each other from day one, and that was really the key to their success. As for the kids? Well, as all kids go, they are resilient. They had their adjustments to go through, but at the end, when they saw the love and happiness of everyone around them, they were happy as well.

Yes, a definite recommendation if you want to feel good and giggle.

Posted by multitaskingmomma at 7:39 PM