Review: Everyone Loves a Wedding by Chris Owen 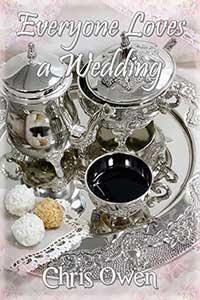 Everyone Loves a Wedding

Spencer is more than happy to stand up with his twin sister when
she gets married, and accepts the role of maid of honor without hesitation. He’s determined to plan the best wedding shower ever, mostly because his other sisters assume he won’t be able to, and he’s focused on giving his twin the party of her dreams. Mostly focused.

When he’s not thinking about cakes, tea sets, flowers, and tulle, he’s entirely caught up by thinking about Dean, the best man. Lucky for him, Dean is equally caught. But in the face of siblings, parents, small children, miles of ribbon, and enough booze for four bachelor parties, do the two of them have what it takes to make it all the way to the alter?

This was such a scream. And super sexy!

Everyone Loves A Wedding. Yes, if the wedding involved this family, this type of comradeship between parents, siblings and in-laws. Yes, if the planner or the man of honor were a twin as precious as Spencer.

Chris Owen made me laugh from the first chapter, made me look around hoping no one was looking as I caught myself sighing about the sexiness of it all, and hope. Yes. Hope. I hope I have a Spencer when next there is a wedding in the family.

Fanning myself silly from the sexiness of Dean and Spencer just about capped the brilliance of this short, light read.

I know it's the time to read holiday reads this month, but I just could not resist. This is an irresistible great read.

Posted by multitaskingmomma at 11:20 PM