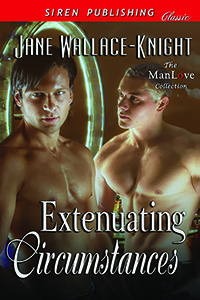 Robert King has it all. He's rich, powerful, and good looking. A name partner in his own successful law firm, Robert is completely focused and driven. He is also completely alone, though by his own design. As he sits alone in his office one night, after attending his father's funeral, he starts to reevaluate his life.

Daniel Sanders works as a paralegal for Robert King, the object of his hopeless crush. Knowing that the older man is out of his league, Daniel barely even lets himself entertain the fantasy. Following Robert's father's funeral, the snap decision to check on him before leaving for the night changes everything as they both seek comfort in each other and finally give in to the lust that has been building between them for months. There's just one problem. Daniel is already halfway in love, and Robert is adamant he doesn't want a relationship.

We meet Daniel making wedding plans with his best friend of forever. He is both a maid of honor and best man in this particular wedding and things are going smoothly on their planning stage. In the meantime, he is drilled about his non-existent lovelife and his crush on his boss of ten months, Robert King.

As we get to know Daniel, we read that he is a character who is strong, head squared surely on his shoulders, a hard worker and a loving son. In fact, he is a sweet man who definitely needs someone worthy.

Robert King, on the other hand, is someone who is just as strong, just as hard working, but scared of relationships. That is, until ten months ago, when in walks an intern in his law firm and. He. Just. Falls. That intern just happened to be Daniel. And one night, things heat up between the men in the most - extenuating of circumstances.

Their romance starts off lusty but things quickly change for Robert unknowingly sought for something that somehow, someway, Daniel gave willingly. Effortlessly. This scares Robert and he nearly loses Daniel. Fortunately, they iron things out and they get their HEA ending.

This was a short, light, romantic and very sweet love story that was not sappy. Neither was it uber sweet it could gag. This was just right.

A surprisingly fantastic read despite its length. Highly recommended if you like to sleep with a goofy smile on your face.

Posted by multitaskingmomma at 7:34 AM