Review: A Family of His Own (Mannies Incorporated #2) by Sean Michael 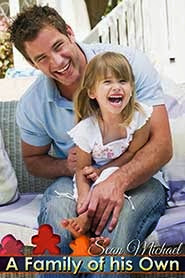 A Family of His Own (Mannies Incorporated #2)
by Sean Michael
Published December 18th 2013 by Torquere Press, Amazon, Smashswords

Will’s a widower with three little girls, including six month old twins, to look after. Most days it’s all Will can do just to get home from his advertizing job in time for goodnight kisses, but now his mother-in-law is leaving the country with her new boyfriend and Will needs the help of a professional nanny.

Benji loves being a nanny; looking after other people’s kids is the next best thing to having his own, and as a gay man, he figures it’s as close as he’s going to get. He’s between jobs and is thrilled when he gets the call from Mannies Incorporated to interview with Will's family.

He falls in love with the girls right away, but also finds himself attracted to their father. Benji knows he shouldn’t moon over his boss, especially when Will desperately really needs his services as a nanny, but he can’t help but wonder what it would be like to have a family of his own.

The Mannies Incorporated series by Sean Michael is clearly designed to make his readers feel good. It is lighthearted, full of family love, full of laughter and sometimes tears.

With A Family Of His Own, we have Benji who gets hired to be the manny to Will's three little girls. An older child of around three years and six months old twins. In real life, this combination can be a real recipe for disaster and Will having to deal with grief over the loss of his husband and seemingly being abandoned by his mother-in-law, one can only imagine he was literally climbing the walls.

Benji is an experienced manny but his clientele is not all that much considering the stigma towards male nannies. With the help of Mannies Incorporated, he lands the job he wanted. Only complication is, he is falling for his wards' father, Will.

Soon, it is apparent that Benji's life now revolves around this family. He becomes surrogate father and surrogate husband. This does not happen overnight, it was quite gradual, but it was an eventuality for both men as they never got the chance to get out and live their lives outside the home. And in case you missed out, this is a Sean Michael romance.

There were only quite a couple of things I was uncomfortable with. One, the scene where the older girl gets to push the plunger on the insulin injection made me cringe. But then I am a pathetic paranoid when it comes to children, so maybe the author knows something I don't. Second, the six month old kids were supposed to be six months old and yet their descriptions pointed more towards older ages - more like 10 or 12 months especially when they were given the spoon to feed themselves?

Other than those mentioned, this is another feel good book about two men and the children. It was light, made me laugh, made me cringe as mentioned, and made me cry a bit for Will's situation. As for the romance between these two? Well, it is a given.

This is a Seam Michael romance. Very entertaining, hard to put down. Feels good to read.
Posted by multitaskingmomma at 3:40 AM