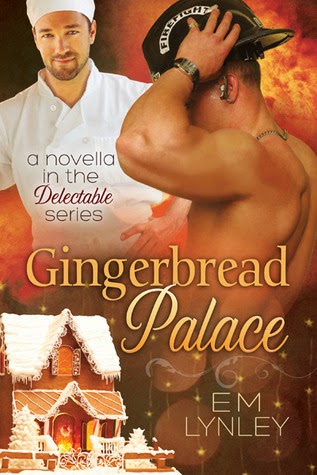 A Novella in the Delectable Series

A week before Christmas, Alex Bancroft’s bakery goes up in flames. When he runs back inside after a dog, firefighter Kevin Flint has to rescue Alex—and Quincy—from the smoldering building, endangering them and inflaming Kevin’s resentment.

Now Alex can’t create the elaborate gingerbread house he donates to a foster-kids charity each year. Fire Station 7 again comes to his rescue, offering their kitchen and their manpower.

Everyone but Kevin Flint, that is. A third-generation firefighter, he’s fearful of stepping too far out of the closet. So when his powerful physical attraction for Alex ends in a sizzling secret encounter in the firehouse, Kevin can’t push Alex far enough away, and Alex returns the cold shoulder.

After a change of heart, Kevin risks his life to prove he’s worthy of Alex’s affection, but without a Christmas miracle, their chances at sweet romance might go up in smoke.

Like all Delectable stories, Gingerbread Palace includes recipes used in the book.

This is the very first E.M. Lynley I have read. So I really had no idea what to expect in terms of writing style. The works had been recommended to me by friends so I took this chance. And there are no regrets. However, it was a style I was not used to. It is a plot that I found a bit formulaic at first until.....

The books starts off with a fire and it is bringing down the bakery of a very popular baker of the area. Alex had been known throughout as someone who is not only talented, but he has a heart of gold. The bakery going up in flames threatened the one thing the people were looking out for every year: gingerbread.

Kevin comes from a long line of men and women in the service of the community as either cops or firefighters. However, he is new to this area so was not knowledgeable of who Alex was or what he represented. The only thing he knows is this: this guy went inside a burning building for he forgot he had been dog sitting a friend's dog. Calling him an idiot did not start the relationship well and from there on out, it just continued to crumple and become dirt. A complication did happen: they had a bit of sexual stint in the firehouse and well, let's just say, it resulted to mutual satisfaction of the physical kind and nothing else. It also resulted to the worsening of a relationship. Or, acquaintanceship.

It was quite hard reading these two men. Alex was kind of closed and Kevin was kind of a jerk. Seriously. These two men could never be considered compatible. In any way. This made me rethink my decision to read this story. I did not want to read about two ------*&%$$#^&------ and end with a happy ending.

Imagine my surprise when I could not put this down. I just about wanted to hit myself. Why was I so interested with this two men?

The secret is the way the author treated the main characters and the plot. There was a lot of evolution plot wise and the men were introduced with their characters underdeveloped. As the story continued, it was only then did they start shedding off their walls and the readers now could see who they really were deep inside. Not the public persona they wanted to show out there.

In the end, the brewing romance did not brew. It just got flashed over a hot pan then simmered to completion. This was fascinating to read and in the end, I just fell in love with these two atypical main characters.

So gone is the presumption of a formulaic read. No wonder it is a bestseller. No wonder my friends kept telling me to read this author's work. No wonder I feel so like a wallflower. This was such a great read despite my earlier misgivings and it ended beautifully.

No, there is no eroticism here unless you are thinking about baking erotica or firemen. The characters took time to get used to, as I mentioned before, but after the book was finished, I loved them and the gingerbread erotica.

Oh yes, don't forget: the author is offering something special: "As a special thank you to readers who buy my new Christmas novella Gingerbread Palace during release week, I am offering you a special additional BONUS story featuring Alex and Kevin at New Year's." E.M. Lynley
Posted by multitaskingmomma at 3:46 AM