Review: In Liam's Wake: The Makeshift Soldier (Toys and Soldiers #1) by Ashlyn Forge 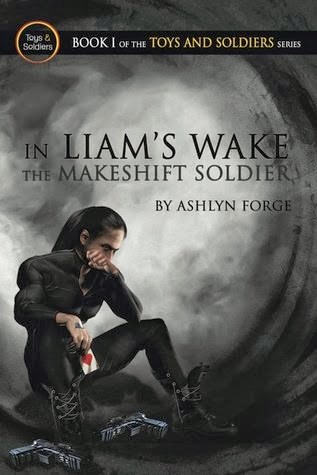 For eight years, Liam has been trapped underground in The Colony—a sanctuary so determined to stay hidden it forbids anyone from leaving once they've entered. His only hope of returning home rests on his best friend Riley who, on the eve of their escape, slipped into a coma.

Despite staggering debt, vengeful mutants and bounty hunters, Liam continues a seemingly never-ending quest for a cure to end Riley's unnatural five-year sleep. Every night, Liam stares at the listless man who not only holds his escape, but his heart. The suffering can end, however; Liam must only forsake all hope of ever returning home again, abandon Riley to his fate, and wholeheartedly serve as a soldier for The Colony—the very people he's trying to escape.

Live the life within his reach, or continue chasing the one just beyond his grasp? He need only submit.

Reading this was really a challenge. I was confused but at the same time not. I wanted to put it down, and found myself reading on.

The story of Liam was really desperate and his desperation was tangible. The story of how he came to this point in life was hinted at, then given in small installments throughout the book, then hidden, and then revealed. It was like peeling an onion and it made me cry, frustrated, yet I knew I had to keep going or I would never get to that flesh that spiced up food in a great way. This is In Liam's Wake. A book I never thought to read and yet found to love.

Am I confusing you yet?

We have Liam, a claustrophobic top-ender who finds himself trapped underground in a world of The Colony he never knew he would be caught dead in. Now, he had the means to make it in that world and yet his need to go back upside was just eating at him. He was taking gambles on everything and even if he insisted he was winning, he really was not.

Then there was Riley. This is the man who made Liam survive all the years underground. Thing is, the guy is in a coma and had been for the past five years. Just at that minute when they had the chance to get out of this underground hell, Riley sleeps for five freaking years. Imagine what that does to Liam.

Then Riley awakes. Liam finds himself getting past the test to be an elete. Finally, when things are supposed to go right, all things fall apart. Will he lose Riley, too?

Ashlyn Forge has written a convoluted world so complex and yet so simple, it is remarkable. This was not hinted at in the blurb I read. Not even quite near it. This is such an astounding book I am still caught in its web. It was exhausting but it was such a great feeling when I finally reached the end.

This ride was so fantastic, it cannot be anything but.


Note: This book may not be available in the near future. For some reason, the author saw fit to remove her ebooks from the vending sites and only the paperback versions are left for sale. We don't know for how long. In any case, I still love this book and its world and will continue to support author Ashlyn Forge.

Posted by multitaskingmomma at 8:07 PM