Review: Inside Out by Andrew Grey 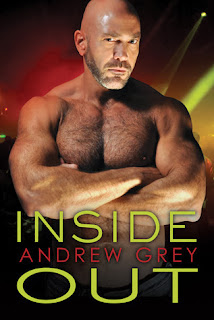 
Former mercenary Bull Krebbs now heads up security at his nightclub in Harrisburg, PA. Working the door night after night, he's seen it all. Though tough on the outside, he's a little hurt that people find him unapproachable. Then he pulls a cute twink out of line to perform a random search, and he's surprised when the guy giggles and squirms.


Zach Spencer, graphic artist, twink, and seriously ticklish, isn't intimidated by Bull. He's in awe, and when Bull saves Zach from being trampled on the dance floor, Zach finds his inspiration for the superhero in his graphic novel.


Soon Zach wants more and makes his move by asking Bull on a date. Though small, he has a backbone of steel. He'll need it—their happily ever after is thwarted at every turn, including by Bull's interloping mother showing up unannounced and enemies from Bull's past threatening to pull him to the other side of the world.


Andrew Grey has the talent to constantly surprise his readers and fans with the works he delivers. Some of his works are filled with such angst and drama and yet are written so lightly and beautifully no one could honestly admit they did not love it. Some of his works are filled with suspense and thrill that readers find themselves at the edge of their seats. Then there are some where the eroticism is so HOT! readers are rendered speechless. - I have been rendered speechless!

Finally, there are his sappy, cheesy, uber-morantic light read love stories that just amazes those who follow his works and delight the newbies. I have found myself crying, laughing and just surprised at many of this author's works, but nothing surprises me more than this last criteria.

Inside Out is an uber-morantic and cheesy love story between two seemingly incompatible men who many would declare were so different in both looks and personality and their known types they could never make it relationship-wise.


At the first look of that book cover, I was amazed that it is none other than Jesse Jackman on it and after reading the book, without doubt he is Bull through and through.

Definitely, I was very curious about how this story would play out and was soon amazed that these two men could look and sound so different from who they actually were. Many thought Bull was exactly what he physically looked and acted like, but that is a persona he wanted the world to see. Who is he really?

I recall this old cartoon about a bull so black, huge, horns that reached no less than 6 feet span and so mean looking. After all the hype in the arena, it ended up offering flowers to his matador. Watching that, it had sent me to 'awws' all the way through to the end. Bull was in truth, a softie, and Zach the supposed twink was no twink at all.

I love Grey books, and then some, but it is these cheesy stories that makes me smile at the end of that read. What would probably stay with me forever is how the author wrote about a man whose public persona was so at odds with who and what he truly was that it took someone like Zach to turn him Inside Out - revealing the softness within.

Highly entertaining. Very romantic. Very cheesy. For those who like the cheesy stuff, Inside Out is sure to make your day!

Amazingly, it's a Grey Book.
Posted by multitaskingmomma at 3:01 AM