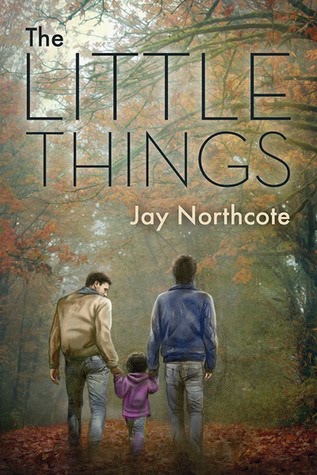 There are lots of things that brighten Joel’s life. His three-year-old daughter, Evie, is one. His close relationship with her mother, his best friend from university, is another. Joel’s boyfriend, Dan, adds spice to his child-free nights, and Joel is pretty happy with how things are.

Then one cold and rainy night, everything changes. Joel's life is turned upside down when he becomes a full-time dad to Evie, and his previously carefree relationship with Dan cracks under the strain.

Meeting Liam, who acts as if getting hurt isn’t a foregone conclusion, shakes Joel to the core. Their attraction is mutual, and Liam makes no secret of how serious he is about Joel. But Joel is wary. He tells himself he’s keeping Liam at a distance for Evie’s sake, when really he’s protecting his own heart. Taking a chance on this new relationship with Liam may seem a small step—a little thing—but is it one Joel can take after losing so much already?

The Little Things is the first book I have ever read written by Jay Northcote. I was encouraged to read this after reading all of the reviews, both the good and the bad, and I was thinking: what kind of book has this author written that has garnered such a diverse range of reviews? In my mind, this sealed the deal for me.

I read Joel and his inner ramblings, his back story, his outlook on life and his relationships. I read him as someone who was immature in all of his obvious maturity. He is a young man, trapped in the world of adults. Both his roles as a young father and a teacher places him in a situation which may not be all that pleasant at times and yet he found joy in it. Even if he was miserable.

When the mother of his daughter, his best friend, Claire, dies in a tragic accident, it was the little things he counted on which fell apart. It was like the curtain of doom fell around him and yet he manages to get a grip, look life in the eye and just plunge forward. However, he is still that little boy deep down. A little boy who is living in an adult world. One who only manages to glimpse life in play once in a while.

Liam walks into his life at the worst of times. The best of times. Liam is much older, has seen life at its worst and at its best. He is mature, living in an adult world. He falls for Joel and Evie. And Joel finds himself falling in love with Liam.

But the little things that used to count and was lost has the potential to be lost once more. Joel is scared and makes a drastic decision. Is he happy for what he did? Was his decision a solid one based on mature logic? Or was his decision based on Joel, the young man, who wanted to be carefree of life?

Reading The Little Things, it made me think that there is a romance budding here, somewhere. It is hinted at. Definitely there are some love scenes between the two men. However, it is the struggle within Joel that takes precedence.

This was painful at times to read, and there were definitely times when I wanted to strangle and shake Joel. He had to grow up fast, though, and this was difficult to do. His struggle to mature was a beautiful read. His evolution from being a young, carefree father into a solidly mature father was beautifully written. Liam was a bonus and he was a beautiful character, too, if a bit presumptuous.

The question many have posed: is this a romance?

But first and foremost: this is a story of life.

Posted by multitaskingmomma at 1:07 AM