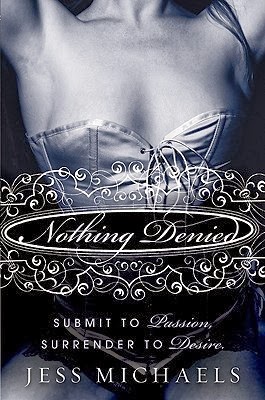 Entering her seventh unsuccessful season, Beatrice Albright is beginning to realize that her beauty cannot compensate for her shrewish ways. A desperate woman whom no one wants, she must seek a man whom no one else will marry: the despised and mysterious Marquis of Highcroft, Gareth Berenger. Rumor has it he is a killer, but Beatrice is far more terrified of spinsterhood and the company of her mother than she is of Berenger's dark reputation.

But Gareth, while intrigued by the alluring hellion's proposal, has a proposition of his own. A man of particular tastes, he will wed no woman unwilling to satisfy them. His bride must be adventurous, afraid of nothing, and eager to experience any passion and pleasure he can devise, no matter how shocking and taboo. If Beatrice agrees to a trial affair if she can happily shed all her inhibitions in the end they will be wed.

Thank you Jess Michaels for saving the best for last! This final chapter of the Albright Sisters leaves me with no complaints! In my opinion, this is the best crafted, steamiest, and sexiest of all.

It would take Beatrice to make the most interesting heroine. While she is a spoiled brat to rival any you can ever think of, only someone with her personality would have the guts to take on the Season's true horror, Gareth. Only she would have the strength and snark to handle Gareth's predilection for sexual dominance.

Now how could this be if I intensely disliked Penelope's character in book 2? And would have cheerfully kicked Nathan in book 2.5? Let me clarify. I thought Penelope had more of a martyr personality than a bratty one. Cutting off her nose to spite her face and then wallowing in self-pity because of what she did. And Nathan... Augh! Straitlaced, uptight, yech. Thankfully, they both changed for the better.

But Beatrice was bitchy from the start. Bitchy she may have been but that also made her strong-willed. She did exactly what she wanted and to hell with everyone else. What a perfect match for Gareth!

Gareth could wilt any female with a look.  In addition, he brings out the darkest suspicions in any male. In that sense, Beatrice was perfectly right in her assumption that only the two of them could end up with each other. Neither of them could have imagined how well suited they were. Only his dominance could curb her shrewish ways but it was her strength that allowed their D/s relationship to flourish.