Review: Now and Then by Brenda Rothert 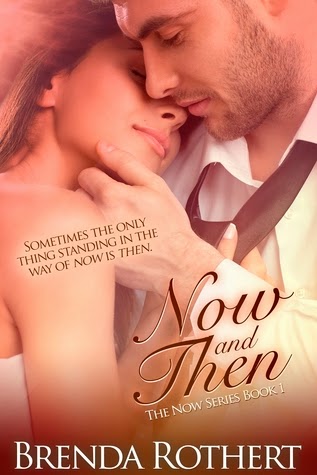 
Now Emmaline Carson is a sharp, settled graphic designer who loves painting, cooking and girls’ night out with her older sister Layla. But then – in the years before she went to art school in Paris – she was a shy, awkward teenager with frizzy hair, a flat chest and a massive crush on the boy across the street, Cole Marlowe. Too bad her incredibly hot neighbor only had eyes for Layla.

Cole is now a confident, laid-back attorney who’s even hotter than he used to be. He’s planning to stay single while working his way up the corporate ladder – until he’s knocked off course by a chance run-in with Emma.

Everything is different between Cole and Emma now. He finally sees her in a way she only dreamed of, and their hot chemistry is fueled by a growing friendship. But Emma’s deception of her sister – who wants Cole for herself – and the secret Cole’s been keeping for more than a decade threaten to tear apart what’s only just begun. Because sometimes the only thing standing in the way of now is then.

I first came across Brenda Rothert in "Bound" and wondered if my enjoying her writing was a fluke; reading her older novel "Now and Then" proves that it's not!

If there would be a theme song for this story, it would have to be "High School Never Ends" from Bowling for Soup. This is it exactly - these characters have been out of high school for years, gotten great jobs and are proving how accomplished they are, yet the personas they grew up with still sticks. The jocks, the cheerleaders, the nerds, they're all still alive and breathing in adult minds even if these children have long gone away. No matter how much we would want to deny it, that's the truth.

It doesn't matter that Emma is a terrific artist who found out she had a life when she went to art school in Paris. She's still the awkward geek and ugly duckling, especially around her older sister. Layla still reminisces about her bitchy, cheerleading days when all the boys worshipped at her feet. Maybe too much so since she's still trying to keep it up even when she's already a lawyer. Good thing they became more of sisters and best friends when they were older instead of getting deeper into sibling rivalry.

Cole, the star football player, still has that same aura which attracts women like flies. I'm happy he's one of those men who know how to keep their junk in their pants instead of flashing it around like candy. After that accident that literally threw him and Emma together, he focuses on one woman only and I really like him for that.

To quote Emma, "Now I know you’re not perfect, but I love you more for it." And who wouldn't? Cole hides such a deep hurt so well, not many people, not even the Carson family, even have a hint about it. That just makes him more human.

But why only 4 stars if I liked this book so much? I simply found Shay's (Cole's sister) character not developed enough. She plays such a huge role in the Marlowe family, I wish there was a little more to their reunion in the end, if only to give Cole a better sense of closure. Maybe in the succeeding books? It was a very loose end for me.

I am looking forward to getting my hands on "Now and Again" because I want to see how Layla pans out. There seems to be a sense of self-destruct in her makeup underneath all the bitchiness and snark. That she is a good person hiding behind a mask is obvious but I want to meet the man that will finally pull it off.

Brenda Rothert has now moved to my list of favorite authors. Now off to hunt for another book...

Note: I received an copy of this book in exchange for an honest review.