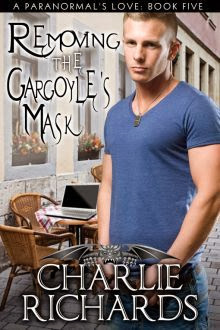 Into the paranormal world: Sometimes giving in to temptation can lead to unexpected rewards.
Martin Marty Beakman finds himself entranced by a bearded, cloaked stranger in a coffee shop, Raymond. Although he feels like a stalker, he returns again and again until he eventually figures out a pattern. When Marty is confronted by his brother Matthew regarding his actions, he admits his attraction to someone he’s never even spoken to. After his brother encourages him to change that, Marty follows Raymond in an attempt to do just that. Instead, he sees something almost unbelievable…Raymond removes his cloak, spreads wings, and flies into the night. When Raymond, out of the blue, contacts Marty online, will he give in to his desire to learn more about the guy? Or, will the strange sight the evening before keep him from seizing the opportunity?

Another Charlie Richards winner. I love how this writer works. She gives us just the right amount of angst, drama, mystery, action and erotica to make her readers and fans be on the lookout for more books.

Removing the Gargoyle's Mask is the fifth installation to her A Paranormal's Love series. Here, we have human Marty spotting the most unlikely individual in a cafe and becomes stalkerish in his actions. He does not know why this stranger is so attractive to him. For one thing, he normally goes for the women, although he does admire a man or two. But he never gets satisfaction. They never seemed right.

As the blurb suggests, he follows him into the night, at the edge of the forest and witnesses something he ought not to have: the man takes off the coat and flies off.

Raymond has been watching out for his mate for a long time and he saw it in Marty. Sneaking out at odd times, he made sure to be at that cafe where he knows his mate is waiting, watching. For him. When he tells his friends about his mate, the two make plans to make sure Marty and Raymond get their chance of happiness.

Of course, as all interferences go, they make a boo-boo out of it. It does end happily enough, thank goodness, when the plan results to Marty getting kidnapped and mated. This was the fun part.

The not so fun part was Marty getting hurt by not even an ex-boyfriend. Raymond's online bestie seems to be a little off-kilter and hurts Marty resulting in his getting fully bonded. And healed. And transformed.

This was such a fun read and I finished this yesterday in under an hour. There was just the right elements of all things I like in a paranormal romance. What I really liked was that Raymond does not get to fully transform. For me, this was just the right approach for it was not what he may look like as a human that Marty fell in love with. Literally, he fell for the gargoyle, fangs, distorted features, short limbs and all. What I did not like was it ended. I really wanted another chapter or two. Other than that, it was a nice, light read that was very, very satisfying in all the best ways.

Posted by multitaskingmomma at 5:50 PM