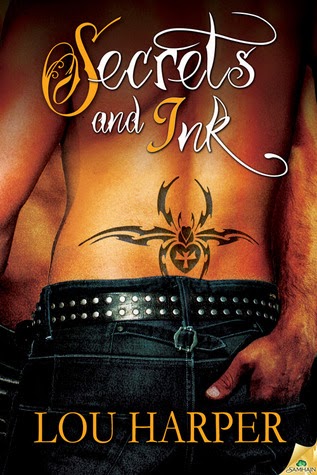 Secrets and Ink
by Lou Harper

When Karma writes you a ticket, pay up or else…

If life was like the movies, Jem Mitchell’s wouldn’t be such a mess. In LA’s glittering world of dreams, he works an unglamorous job at a gourmet grocery store. His past is so deep and dark, the details are lost even to him. All he knows is he was once cursed by a meter maid, and ever since, his love life has sucked.

When Detective Nick Davies becomes a regular at the store, Jem dares to hope he’s un-hexed at last. He should have known that sex with a remarkably normal guy, devoid of weird fetishes and fatal personality flaws, was too good to be true.

During a post-encounter cuddle, Nick recognizes the tattoo on Jem’s back—and remembers him as a young hustler he arrested nine years past.

As Jem’s memories come crashing back, he flees from Nick, but fate contrives to keep pushing them back together. And when Jem’s old partner in crime is found murdered, the stakes are raised for life, for love, and a dangerous drama with no guarantee of a Hollywood ending.

Warning: Stars a mild-mannered store clerk with a shady past, a hunky cop whose passion in the bedroom is as big as his passion for justice, and celebrity sightings you won’t see on TMZ.

They had met before but it was not the best of circumstances. You see, Jem was a young punk kid going around with the wrong friends and got arrested for soliciting an officer. He was 17 at that time so his record is closed. Thing is, when Nick and Jem started seeing each other, neither of them realized that then, it was Nick who was the officer who arrested him. Talk about uncomfortable.

What made it worse? Well, Nick was very attracted to that young punk and felt the worse for it. When he finds out that Jem is none other than that Sasha years past, his face reflected an emotion Jem misinterpreted as disgust of him. Little did he know it was on himself that Nick felt disgust for.

What made this story work was the way Nick did not give up on Jem. They just gravitated towards each other and they managed to iron things out to both their advantages. What came in between them was not of their own making, though. It was just a murder.

The mystery behind this murder was unexpected and the resulting resolution was even more surprising. That shocked me. I really thought Lou Harper would be kinder to that individual, but as things go, if that thing happened, yes, no other way.

I loved the way Nick was amused with Jem throughout the book. He was amused, but he loved him all the same. It was so tangible, it made the story more romantic and sweeter and yet made Nick solid as a character. It made him real, ,more human rather than a figment of an author's imagination.

Jem was a survivor and he needed to be, after having bitched at Karma. The meter maid, not at Karma itself. He was hilarious, too. Sweet, charming and utterly guileless. He should have been scared of Nick, but was not. And even if things don't go well according to plan, he still maintained his joy in life. This was what really endeared him to me.

Overall, Secrets and Ink is a romantic comedy with a twist of mystery and some bit of action. Highly entertaining and very romantic.  Hard to put down.
Posted by multitaskingmomma at 7:19 PM