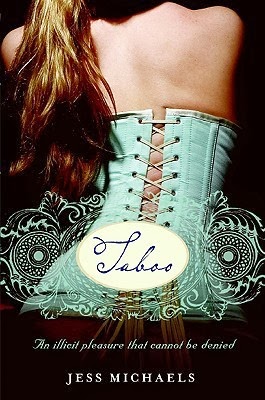 Every indiscretion has its price...

Cassandra Willows has made a name for herself as one of London's most south-after seamstresses and as the creator of intimate "toys" much beloved in the bed chambers of elite ladies and lords. But her success cannot soothe her guilt and pain over a most devastating betrayal.

Nathan Manning, Earl of Blackhearth, will never forgive the exquisite Cassandra for abandoning him without a word on the day they were to elope. Now he is back in London and hungry for revenge. Armed with scandalous, provocative memories, the handsome vengeful nobleman blackmails his former lover into a most illicit affair...and reignites the raging fire that once consumed them both.

This novel is 'Taboo' in more ways than one. Cassandra not only works (oh horrors!) but is also an acclaimed mistress. Plus she is an extremely sensual woman who makes sex toys and sexy lingerie. To top it off, she wanted to marry a man with a title while her parents were of the working class. Her entire life is off limits.

While Cassandra is a woman of steel, Nathan is a spoiled brat. Somehow this boy (cannot bring myself to write man since he acts like he is about ten in every aspect except in bed) refuses to see how anyone besides him can suffer any hurts or be able to survive while acquiescing to his demands. He is blind to the fact that he is being manipulated by his parents and plays blind to Cassandra's hurts. This is done while all the while he professes himself obsessed with her? What a jerk.

Jess Michaels did a terrific job on this novel since I'm sure that's precisely how I'm expected to feel about Nathan. Sometimes I wished that Cassandra would just give up and marry Stephan Undercliffe instead seems he obviously seems to care about her more! Unfortunately (for me, anyway) the heart dictated otherwise. It did have to take Stephan to set Nathan's head on straight and go after the woman he professed to love beyond all else. Cassandra, too, thankfully, was truly all good and gave this novel the happy ending that it needed.

This is the hottest installment of the Albright Sisters stories so far and rightly so! It would have been very disappointing if the sex was humdrum given that Cassandra was so infamous among the men for her sensual nature! It played very well into the storyline and reinforced for me how much of an ass, even if he was a hurting, manipulated ass, Nathan was. It also made the conclusion and epilogue that much more satisfying.

Just one question, Ms Michaels. Doesn't Stephan deserve a story, too? After all he did for these two, it would be fitting that he has someone fall in love with him that is deserving of his wonderfully caring personality. I hope, and I wait!
Posted by Ramona at 3:01 AM