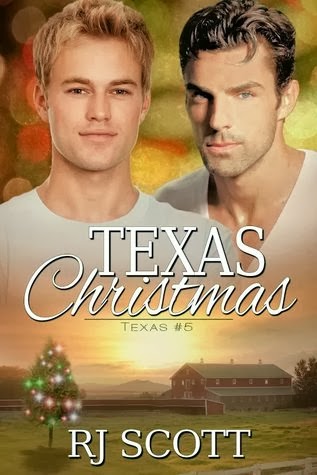 Centering on Jack and Riley, parents, lovers and friends.

Eli and Robbie have their home on Double D land. Their love is rooted in the Texas soil and they weather as many storms as can be thrown at them.

And Liam, a young men with a head full of dreams and sleep full of nightmares, finds that all things are possible when Marcus decides to interrupt his solitary existence.

I had the fortune to read the Texas series over the course of the week as I just fell in love with Jack and Riley that first time. I was very excited that by the time I finished with what was for me, the best, Texas Family (Texas #4), I saw that there was now a Christmas story. However, I must say that I thought #5 was best and reading the blurb made me conclude that this is going to be another slapstick holiday story involving lots of kids and six men in the ranch. I should have remembered I was reading an R.J. Scott.

I never thought I would say it, but #4 just dropped to good and Texas Christmas is now, the best. Yes, this is a holiday read and so should include some angst and bits of drama, but in the Scott way, she treated it without much melodrama and just a whole lot of love and romance and more love for family.

Texas the series is all about family. No matter what shape or form, once loving and accepting, it can get out of its boundaries and just embrace everyone in its path. Including us readers.

Liam, whom we first met in #4, is a broken young man but he is a survivor. He has his off days and good days, but the horses, and the men of DD ranch were there and they served as buffers through the rough patches. And then there is Marcus.

Marcus first saw Liam at the ranch when in the midst of helping Jack and Riley become parents. And he just fell for the young man. Could not take his eyes off him. Could not stop thinking about him. And found himself going back to the ranch at all times of the week just to ask the guy out. Finally, after countless attempts, Liam frustratedly agrees. Of course, it does sort of make things bizarre when Eli decides to cloth the young man in offshoot apparel seen only on the covers of fashion magazines. Marcus just drops.

I don't know how the author managed to pull this off, but she did and it was beautifully done. It was organized. I never found myself scrambling for which way a side story happened. This whole series is just flawlessly written. There is never a time to get lost. This is what really gets to me. The plot was just done so well and the romance between any of the couples never got lost in their telling. I have read many a series and one common downfall is the timeline of events. This one, well you know what I mean.

Texas Christmas was beautiful. It gave the love, it gave the drama, it gave the loving between the men and for those seeking some bit of hotness, well, there were a lot of HOT! scenes. I could never have finished this series within the week without falling in love with the men of the DD ranch.

Posted by multitaskingmomma at 8:16 PM