Review: Where the Lovelight Gleams by Keira Andrews 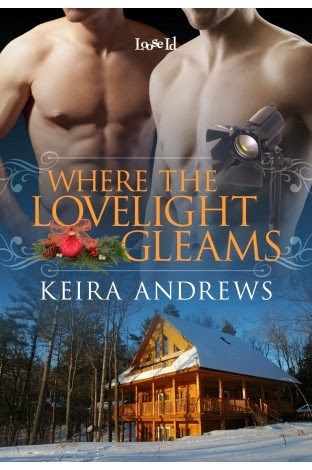 Where the Lovelight Gleams
by Keira Andrews

This Christmas, actor Ryan Drake is pining. He may get to kiss gorgeous Cary Holloway on the set of their hit TV show, Space Academy, but he knows it'll never happen in real life. Charming Cary--the son of Hollywood royalty--is straight, as evidenced by his starlet girlfriend. But Christmas is a time for unexpected gifts, and Cary accepts Ryan's invitation to leave the palm trees behind and spend the holiday with his family at their cabin in the Great White North.

Amid the snow and mistletoe, Ryan struggles to keep his longing under wraps. Little does he know, Cary wrestles with his own unspoken desires, and his very identity. Surrounded by family and holiday joy, their warm friendship deepens. Will these two co-stars have the courage to brave Hollywood pressures and take their romance offscreen--or will it be only in their dreams?

Where The Lovelight Gleams is another holiday read that just keeps us all blanketed in the warmth of the Christmas Holidays. This is the time to read all the heartwarming and positive books to get charged for that holiday spirit that can bring down even the staunchest of holiday-ers.

Here, we have Keira Andrews bringing in the love. Two Christmases in a row. We get to meet two of Hollywood's brightest, and youngest stars. Ryan and Cary are part of the team of a hit television show and their roles bring them to the fold. Their fold. It seems that the television series writers are cooking up a storm by pitting their two roles as a love team. Did they know what these two were secretly harboring deep within their hearts?

Cary is the product of Hollywood's brightest and blockbuster stars and knows what it means to be in the limelight. Ryan is a Canadian who braved to cross and be a hit as well. Thing is, Ryan is an out and out gay and has had a huge crush on his co-star all this time.

Off for  holiday break, Ryan is surprised when Cary calls and says he is coming over. Sure, he was invited but turned it down. You see, he has this girlfriend? In any case, Ryan is delighted to have his best friend in for the holidays.

One thing leads to another, including a sexy snow fight in the forest while hunting down the perfect tree, and they kiss. As kisses go, this one is hot and it is winter in Canada. How scorching is that? Well, this is a holiday romantic read and we all know where it ends.

What I am disappointed is: it ended. Okay, so all books are supposed to end, I know! but thing is, it ended too soon and this is a plot with a HUGE potential to becoming a full length novel. I want the details on how they reached the point they did at the end. If only the author could grant me a Christmas wish, that would be it.

Overall, one satisfying, light holiday read and I am happy, happy, happy. Wish it were longer though.
Posted by multitaskingmomma at 2:22 AM