Review: Where You Lead by Mary Calmes 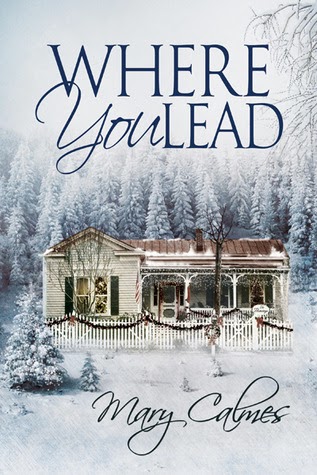 ATF agent Peter Lomax isn’t a hearts and flowers kind of guy, but he can be possessive, and it caused problems until Carver Fleming. Carver may be part of the art world, but he gets Peter, loves belonging to the man, and Peter treasures the way Carver understands them together.

Carver loves Peter, but he's fully aware that six months doth not a commitment make. Carver wants to make the relationship last forever, but he’ll have to leave their life in Chicago to take care of the family he loves. He wants to do it with Peter by his side, but going from the city of Chicago to tiny Colt, Kentucky is a big change.

Where You Lead is a novella by Mary Calmes. For me, an author who never fails to get the romantic in me wanting that somehow, her stories would just be, oh so True.

Then Carver drops this information on Peter. Will this be the thing that ends their relationship?

Carver withheld information from Peter. He sort of tricked him into joining his family for Christmas and once there, it was only then that Peter finds out that Carver is moving back home to help his father care for his mother.

Peter is left floundering a bit, a little mad, but at the same time amused. This was so typical of his Carver so what else is new? He would just have to settle for a long distance love affair.

When he meets the parents, Peter just fell in love with them. His stoicism drives Carver frustrated which amuses Peter all the more. Without a doubt, he will settle with Carver in this small town. It is his turn, as he said. In the future, it will be Peter's turn.

The relationship between these two men is very romantic but it makes me wonder if they can translate to real life. I wish. I really wish.

And really, this is the whole reason why I just love this book.

It is romantic without being cheesy. It has some drama that never went the uberway. The reactions of some women when they first saw Peter was just hilarious.

So, what about the wedding? When is this going to be?

Where You Lead by Mary Calmes. Romantic Must Read for this Christmas break. Love it!
Posted by multitaskingmomma at 3:01 AM