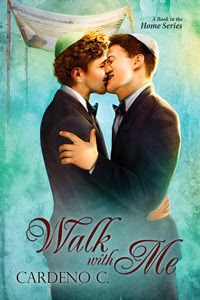 Review Based On eARC

A Book in the Home Series

When Eli Block steps into his parents' living room and sees his childhood crush sitting on the couch, he starts a shameless campaign to seduce the young rabbi. Unfortunately, Seth Cohen barely remembers Eli and he resolutely shuts down all his advances. As a tenuous and then binding friendship forms between the two men, Eli must find a way to move past his unrequited love while still keeping his best friend in his life. Not an easy feat when the same person occupies both roles.

Professional, proper Seth is shocked by Eli's brashness, overt sexuality, and easy defiance of societal norms. But he's also drawn to the happy, funny, light-filled man. As their friendship deepens over the years, Seth watches Eli mature into a man he admires and respects. But when Seth finds himself longing for what Eli had so easily offered, he has to decide whether he's willing to veer from his safe life-plan to build a future with Eli.

**The books in the Series are stand alone and can be read in any order.

Walk With Me is the story of Eli Block & Seth Cohen. Their story spans from 2001, when a young Eli first gets a good look at Seth. The course of their story, their romance, moves as time does, when Eli starts growing up, and Seth is squarely marked on his cross hairs. It finally ends in January, 2014, where the series also marks its end.

This is a ridiculously funny, loving, romantic, and utterly sweet, story that sent me laughing from beginning till end. Once I did reach the end, though, I could not help but tear up. For so many reasons.

Eli was young, much younger compared to Seth which does start out their relationship on an uncomfortable level. The young hero worshiping Eli was a force to contend with and clearly, Seth was at odds on what to do, how to react, what to make of it all.

Seth was a conservative and formal kind of guy. Well, to the public he is. He strove to become a good rabbi, leader to his flock. His conservative world was put into check by the hurricane that was Eli.

As uncomfortable their friendship begins, it soon morphs into a solid, platonic relationship. It is not something Eli wants, but he'll take it. He'll take anything just to be with Seth. And Seth does seem to be accepting, a solid shoulder to cry on. Soon, the closeness between the men is apparent to all, and we readers wait it out. We walk with the men as they set out on their adventure.

Working as the assistant to Eli's father, Avi, who just happened to be the head rabbi, Seth found himself the focus of some strange, sometimes, highly physical, wedding tournaments - themed most of them. 'Tournaments' being the operative word here and the only hint I will give out.

I wonder where the author found all those strangely worded and quoted themed wedding invitations? These set the tone for the upcoming chapters. It came to the point where I was almost scared to read those invites for poor, poor Seth. I don't know what to make of it. But poor, poor rabbi! That was pure evil, really, to have the poor man go through all those - challenges. Funny, but still evil hahahhaa

Of course, I did laugh myself hoarse. The stunning visuals were enough to make me cover my eyes and just laugh my way through while trying mightily to calm down. There were times the visuals were just too overwhelming the only thing I could do was put down the book and try not to laugh.

I have followed the Home Series by author Cardeno C. almost from the very beginning, even before I even thought of this review blog. Through the series, I saw an author grow as an - well, author. For although this does mark the end of this particular beloved series, this book #7 also shows us readers and fans the growth of the author. This is probably her best work.

Her writing style has improved so much, her stories have become more visual with each new story, leaving a lot of imagining on our part. Now this talent, this ability, is not something that one can develop overnight, but seemingly right in front of us, this author has done just that. Giving us readers the stories we could only dream of. Beautiful stories of men, their relationships and their lives.

I love this series and still continue to read the books. I am sad to see it end. However, I am also very happy that the author has decided to grow and give us readers more to look forward to.

Posted by multitaskingmomma at 9:37 PM