Review: After the Storm (Book #8 in the KGI Series) by Maya Banks 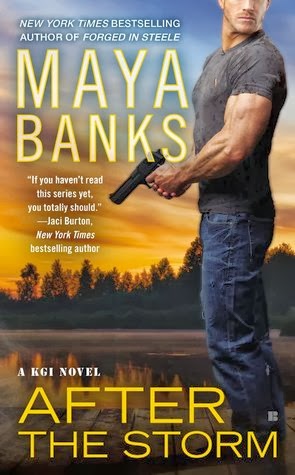 After the Storm (Book #8 in the KGI Series)

Over the years, Donovan Kelly has fought relentlessly for justice, women and children always holding a special place in his heart. Working side by side with his brothers, Donovan has witnessed firsthand the toll it’s taken—physically, mentally, and emotionally—on his loved ones, and the innocent lives caught in the crossfire. What he never expects is for his next mission to happen right on his home turf—or for it to take a very personal turn.

Picturesque Kentucky Lake is the perfect place for a soul in search of safe harbor. A beautiful stranger has arrived—desperate, breathless, and on the run from a dark past closing in on her and the younger siblings she has vowed to protect. Donovan must now draw on every resource at his disposal—if he wants to save a woman and the children who may prove to be his destiny.

I have been a follower of the KGI Series since its start and I literally jumped up and down after I read Maya Banks was releasing the next book! Then I find out it's about Donovan and him falling in love with someone who isn't a supercomputer... well now! I just had to read this.

In all honesty, I have mixed feelings about this one. First, it's definitely not the usual KGI story with guns blazing, blood and gore, and exciting chases in exotic foreign countries. The entire story takes place at home, when there are no assignments for any of the teams. Second, for all of Van's calculating nature, he seems to have gotten Cupid's arrow right between the eyes. Not only does he fall in love with Eve as soon as he sees her but he wants kids, too!

BUT, I did feel that this slower, quieter pace would suit Van much better than the action-packed stories that his brothers had. While he had been one of the last holdouts among the brothers (leaving Joe for a book coming soon, I hope), he was the one most suited to be a family man. It's just right that Eve would have a maternal streak as strong as his paternal one. Van was always the planner, behind the scenes, the geek. Love at first sight also happened to all the brothers, so why not him, too?

If it seems I am rationalizing, I'm not. It took me about three hours to read the book cover to cover so I know I liked what I read. I love how much Swanny has come out of his shell.  I like that Joe has grown up more. I'm all anticipation for the undercurrents I noticed between Skylar and Edge; not to mention the very obvious coming relationship between Rusty and Sean. And Steele! Oh my [Buns of] Steele is a Big Daddy! The book is a breather of sorts between missions and shows they're people, not just alpha bad asses - which would be very one-dimensional, come to think about it.

Could I consider this one of my favorite books of the series? Maybe not. While Travis was to be admired and Cammie was a darling, some of Van's actions and words were downright "out there." And Eve made some very strange snap decisions that I wouldn't have agreed with at all nor hope my daughter would make!

However, this isn't my story to tell, it belongs to Maya Banks. And I respect where her imagination takes me since I'm only going along for the ride.  I intend to be waiting at the stop when the next KGI book is released, whoever it's about.
Posted by Ramona at 7:46 AM