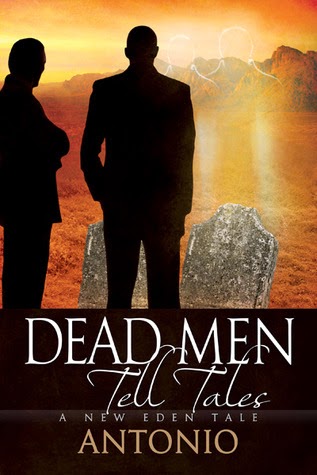 Mason Kincaid’s life is about to change. He’s adjusting to being alone a year after the death of his lover when a call from his wayward sister sends him out west to New Eden to bring not only her, but her twin sons and a stepson home.

On the outskirts of New Eden, Mason secures a room in the last place his sister’s abusive boyfriend would expect: an adult motel where an eccentric madam allows the children to stay for a price. Despite her warnings about a resident ghost, after one night, Mason’s sure that fending off groping apparitions and violent johns will be his biggest problems. But when he meets Officer Ken Cannon for the second time, it’s at the scene of a double murder.

With possibility of romance looming in the background, bodies start piling up around Mason. While learning who he can trust, he must deal with a lovesick teenager, a ghost with a message for him, and becoming the owner of a hotel that once belonged to his “friendly” ghost. A hotel someone’s willing to kill for.

Dead Men Tell Tales is the first book of the series New Eden Tale focusing mainly on Mason Kincaid. A phone call from his estranged sister has him driving off to New Eden thinking he would be saving her and her young children from a life of torment. What he got was the children. But his sister and her lover are dead.

While trying to sort out the legalities of keeping the children with him, waiting for the murder investigation to end and for the authorities to release her body so he could bury her, Mason finds himself caught between a naughty ghost, his step-nephew who could not keep his eyes and hands off him, an aging madam plus her two prized beautiful assets and a cop who sent his mind to blank.

Sorting out his life would have just been fine but Mason is almost naive when it comes to finding whom to trust and what to think of the situation around him. His true personality emerges now and then with some really stupid decisions, sudden outbursts of anger and eventual regret of his unable to face the unknown.

There were times I found myself making the tsk tsk sounds as Mason muddled his way through some situations. He does have commendable redeeming factors like his ability to finally admit making wrong decisions and not repeating them. He is also someone who is unafraid to face up to realities and responsibilities and does exceedingly well in his efforts to make a go of a project by utilizing his new found friends. If only that ghost would stop wanting to get into bed with him!

Even as Mason flounders a bit especially as more bodies are popping up and a bitchy widow bitches at him for some reason, eventually he does find his balance. One man especially is making his life easier: Ken Cannon.

Meeting the man at the first murder scene that involved his sister, Mason sees in Ken someone who could finally make him want to move on and accept him as he is, floundering naivete and all.

Dead Men Tell Tales is a mystery laced with paranormal activities that I found hilarious. I found myself trying to catch the hints left once in a while by the author. It was entertaining bookmarking each hint and going back once possible connections were found. Mind you, the author was naughty in this aspect, he left the hints in the middle of nowhere and it was quite hard to make connections.

I can't wait for what mystery he comes up with next.
Posted by multitaskingmomma at 12:01 AM