Review: Dumped in Oz (Tales from Kansas #1) by Andrew Grey 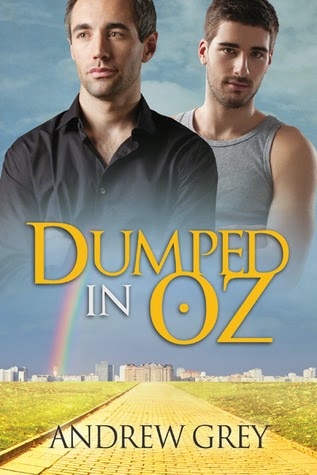 Because of an opportunity he’d be a fool to turn down, Lyle Powers transfers to his company’s warehouse in central Kansas. The last thing he expects is to meet another gay man in the small town, let alone one who captures his interest.

Roger Kypers is a recovering alcoholic with a twelve-year-old daughter he only gets to see for part of the summer. Neither Lyle nor Roger is looking for a relationship, and they fumble at the start, yet emotions build as Roger shows Lyle the landmarks of Oz.

But when Roger’s wicked witch of an ex-wife threatens to take his daughter away for good if he doesn’t act “normally,” he’s faced with the challenge of letting her get away with it, or fighting to accept himself and standing up for what he knows is right.

Dumped in Oz is pure romance. One that sets the heart to pump, the skin to flush, the rage to get on, and the emotions to go through a roller coaster ride. Thanks to a fast paced story about kindness, love, tolerance and almost giving up. Thanks to a love that came out of nowhere and stayed.

Lyle supposedly gets dumped by the company he works for in a little town called Oz in the middle of nowhere. Well, it's in Kansas really but he thinks he is in the middle of nowhere. The point was the company hoped he would find his way and bring out his potential as a good manager they knew was hidden there, somewhere. This is a place which he thought was the dead end. He never thought to fall in love with the place, with the people, and the whole yellow brick road that led him to Roger.

Roger is a native of Oz. Owns his own thriving restaurant and trying to make life for his daughter less stressful. His divorce from a loony woman and their subsequent one-sided sparring bring about a drama the whole town saw first hand and the readers to get angry about. There would not have been any drama had Roger been a different man, but he is just a good man and avoids conflict, even if it harms him. Some may claim he is a wimp. I say he is a man who was just plain good. A little naive, maybe, but he is good through and through. A rare one.

The two men's romance is expected for basically they are the only two gay men in Oz, and the main characters. What is unexpected is that Lyle, seemingly passive Lyle, shows a whole new different side that even he is surprised at himself. That was the sign everyone was waiting for. The sure sign that what was going on between the men was something rare and lasting.

Dumped in Oz is a Grey book and I am very familiar with his works. But this author, this man, he just continues to surprise me. This tale from Kansas shows us readers that things are not really what they seem, that things thought of as the usual, turns out to be the unusual. This is a light read, a romance. The element of Andrew Grey gave it a depth, an insight into life, showing us that he may be giving us readers a romantic respite from our humdrum lives, but we end up thinking deep and hoping hard.

Posted by multitaskingmomma at 7:14 AM