Review: The Exile and the Detective by Edward Kendrick 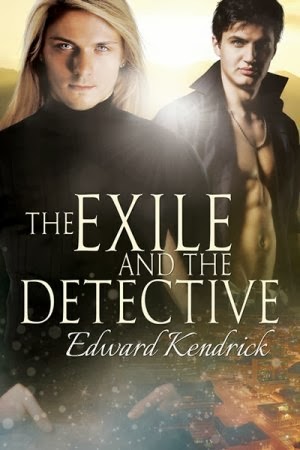 Doran, exiled from his homeland, still must deal with its allies and enemies in his new home. Detective Nick Groves' life intersects with Doran's and the problems surrounding him. Nick has a decision to make about the handsome exile. Will it be the right one?

Exiled from his homeland, Doran Taggart now runs a bookstore in his new home town. His only companion is his cat, Inwe. His only duties, despite his exile, are to protect the allies of his king and kill the king's enemies, should they appear where he now lives.

Detective Nick Groves is searching for leads in the disappearance of two men and a woman. In the process, he meets Doran and is instantly captivated by the violet-eyed young man. Soon afterward, things take a strange turn with his case. Is Doran the cause, and if not, does he know why strange things are happening?

Nick must find answers to all this and more, while dealing with his growing feelings for Doran--feelings that are reciprocated, even though Doran knows nothing can come of them. The men are, after all, from two different worlds. If Nick learns the truth about him, Doran is certain it will the end of any chance for the two of them to be together.

The Exile and the Detective is another one of those Edward Kendrick tales where the readers gets the chance to read three or more stories in one. This has four parts really and each part has a different case to solve.

The story brings readers through the different mysteries and into a fantasy world. It is a world that cannot tolerate technology posing a lot of problems especially for Daron when he gets near these.

Nick Groves is a young detective working with an older and more experienced partner. The tale begins with a simple case of mysterious disappearances involving people from seemingly different walks of life. The disappearances were gaining media attention and thanks to a trusty old TV with questionable reception rendering it to nothing more but a glorified radio, Daron hears, listens and is intrigued. Soon, he gains access to some information, studies the case and calls in his input. This is the beginning of a whodunnit with a paranormal/fantasy twist, and an unexpected, unoficial partnership with Nick.

So what is making this different from the regular mysteries? Well, Doran is not at all what he seems. He is an exile from a far away land we are only familiar with thanks to fantasy and lore.

As a mystery, this involves three or more for the men to solve. Along the way, they meet some mysterious characters, deadly at times, weird in others. The men work to solve the cases thrown their way and are successful for it, giving way for more cases to unravel. Soon, Doran starts revealing things about himself and Nick finds himself wondering what he got himself into. Then again, he has no choice but to accept it, if he wants to keep Doran for himself. Then there is Inwe, Doran's cat who does not seem to act at all like a cat should.

Nick's and Doran's relationship is pure romantic fiction and yet this does not ruin the tale. This is fiction after all, so anything goes and the author takes full charge of it. True to the Kendrick signature, this is a tale best described as a simple plot but is highly entertaining especially as it is spiced with a dash of man on man romance.

For those who love to be entertained by pure romantic fiction, this is a good book to open and relax into.