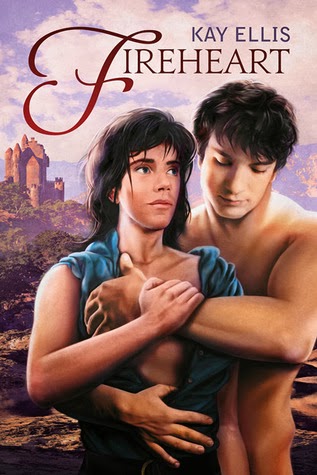 In a world where magic is outlawed, Tylanovaar must hide his true identity. As a young prince about to be married, the last thing his people can find out is that he has the gift of fire in his veins.

But when he meets the man hired to turn him into a suitable heir for the throne, he’s forced to keep another secret.

Sully is an elite lawkeeper called a Rider. When a young man he meets by chance ends up being the Prince of Evolin, Sully becomes his tutor at the king’s request. Tylan fascinates him, and a journey to help Tylan learn to control his magic gives them time alone, but not enough. They take ever greater risks to be together until they are caught in Sully’s bed on Tylan’s wedding night, causing Tylan to lose the fragile hold he has over his gift.

Fireheart brings us into a fantasy world of kings, princes, magic, and elite lawkeepers called the Riders. Here we meet Sully, a feared and respected Rider who finds himself getting up close and personal with a young man he inadvertently saves from being beaten up in a place where he should never have been in the first place. The young man soon turns out to be someone he least expected.

Tylan, is the only son of the ruling king of Evolin. A kingdom ruled with an iron fist by a king whom many considered to be powerful but closed-minded. When he and Sully meet, sparks not only flew, but some bit of magic as well.

Nothing much was said about the evolution of the relationship between the two men. It happened. Sully was reluctant to pursue it. Tylan never let off of his interest in the man. As events beyond their control gradually unfolded, the two were finding it harder and harder to keep their affair a secret. Things get complicated when Tylan has to act the man and prince and marry a princess. This wrecks havoc over his tentative control over his magic. This control was tentative at best and this lack of control seemed to take a sidestep only when in the presence of Sully. Otherwise, it was total lack of control. As the magic involved fire, this could prove very dangerous. Not to mention: magic is outlawed in Evolin.

I am a curious animal, so should there be a sequel of two, I would love it if the author would be so kind as to answer to my questions.

One: the Riders. I know they are the elite lawkeepers but how are they chosen? Are they born to be Riders? What type of training do they go through? And many other questions that should serve as a back story for this group.

Second: Tylan's magic. How? What part of his DNA set this in him and in the other magically gifted people in this world? I really want to know more about the hows and whys to the magic.

Okay, so maybe I am a bit too curious, but this is just how I am, especially when it comes to fantasy. It is my favorite genre after all - other than MM. So yes, I am not shy to ask questions. I just hope the author does find the time to answer them.

Overall, for a novella that is just the beginning of a larger arc, Fireheart is an intriguing and curious fantasy that kept me curious and wondering even after I reached the end.