Review: From Johann To Tannenbaum (Toys and Soldiers #4) by Ashlyn Forge Review, Excerpt, Give Away 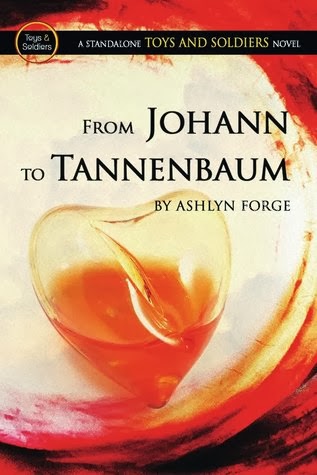 Johann Andreas IV is a rich loser who has a raw deal in life. He is handsome, yet with a poor self-image, clever, but still uneducated, and despite being the heir apparent in his grandfather's will, he's about to be thrown out with nothing.

In the underground colony of his birth, two things matter the most to its denizens: a name, which will guarantee his wealth and status, and a designated branding tattoo, the only thing allowing Colony-Dwellers to live safely underground. Johann has one year to secure both.

He's up to the challenge but one thing stands in his way; his mother has plans of her own...and they don't include him.

This just totally blew my mind, surprising me on so many levels I have lost count.

This is a very complicated story, so I am not going to attempt to write the summary. It was quite hard to follow at first for there were a lot of twists and turns happening. Midway through, I was still a little confused, but the plot was getting there. At the end, it was when there was a light bulb moment and I thought: Yes, that is exactly it! Finally!

I will try not to make this as simple as I could, for mind you, Ashlyn Forge is one author who can make simple look complicated and when the whole plot unravels, you find out that, indeed, yes, it was that simple.

Johann is a character who is just what the blurb says: a loser. And yet this man is not a loser. It is his circumstances that made him so and it does not really help that he has a mother from hell. (We'll talk about the mother later.) The death of his grandfather placed him in a position of envy, so to speak, but he gets targeted from all sides, especially his mother. Getting targeted does nothing for Johann's fragile personality and there were times I just wanted to slap this man silly for falling into them willingly so to speak and yet he tried so hard not to. He was indecisive and yet was decisive, I just could not get the grip on him.

Tannenbaum is another complicated character. Starts out just as fragile as Johann but soon gets his strength on and proves it. This was the character I liked better should I have to weigh the two even if he was a pain just like Johann, but the two are just a fantastic pair so I don't want to choose at all. Thing is, he is also hiding a secret that set my teeth to grit so hard.

Now for the mother, Marian. I don't want to talk about her, frankly. Her character pushed the right nerves and every time I saw her name I skipped on ahead, to be honest, but then went back just to have the chance to cuss at her. I know this one so well like the back of my hand, it is not funny. So there. Yes, I hate a character.

Thing is, if I had not hated her so, if she were not in this book, this story really would just come out humdrumboring. Hate her, I really do, but she made the story leap forward and cohere perfectly. Color me confused, but she is one character I love, love, love to just plain and angrily hate, hate, hate! And that ending! Whoa! Bravo Ms. Forge! Marian's character got me 100% loving this book.

This story is set in the sci-fiction place called The Colony. A complicated, yet simple colony, its culture, its society, its mores, and their laws. This is the world where we first met Liam of In Liam's Wake. He's here, but is not the focus. But he is here, so I am pacified .

Overall, yes, I loved this, pain it was to read and my head screaming stupid for all the stupidity going on. Thing is, I could not put this down. It is very hard to put down. So I did not put it down and enjoyed myself every read of the way.

Note: This book may not be available in the near future. For some reason, the author saw fit to remove her ebooks from the vending sites and only the paperback versions are left for sale. We don't know for how long. In any case, I still love this book and its world and will continue to support author Ashlyn Forge.

Posted by multitaskingmomma at 1:00 PM