Review: Going Up by Amy Lane 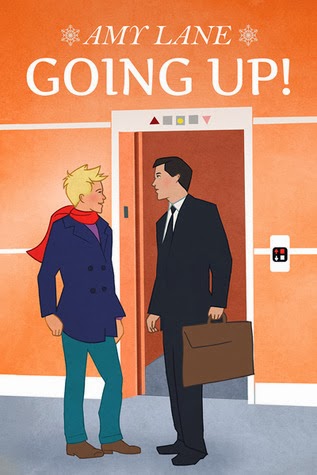 Every dreary day, Zach Driscoll takes the elevator from the penthouse apartment of his father's building to his coldly charmed life where being a union lawyer instead of a corporate lawyer is an act of rebellion. Every day, that is, until the day the elevator breaks and Sean Mallory practically runs into his arms.

Substitute teacher Sean Mallory is everything Zach is not—poor, happy, and goofily charming. With a disarming smile and a penchant for drama, Sean laughs his way into Zach's heart one elevator ride at a time. Zach would love to get to know Sean better, but first he needs the courage to leave his ivory tower and face a relationship that doesn't end at the "Ding!"

Going Up is a charming novella about two men in an elevator. Both are trapped by their circumstances. One is a rich kid of rich political family and is gay and unhappily closeted. The other is poor kid coming from a family of teachers, is gay and happily out. They meet in an elevator and a romance within the four descending walls begins.

This was a plot that could have gone wrong but did not. It was charming, romantic, was not in the bit cheesy, and quite hard to put down. Every single time the Ding dinged, I found myself quite frustrated their conversation ended. There was a time where they had a bit of misunderstanding but it was shortly ironed out and their romance continued. Best of all, they did not just fall into insta-lust or insta-love, or insta-anything as most novellas go. Here, the men started their relationship over a period of time that was thankfully not felt by any reader.

I just found myself smiling throughout this book and loved it. Not the elevator story I was prepared to hate. Not. At. All.

Posted by multitaskingmomma at 2:00 PM