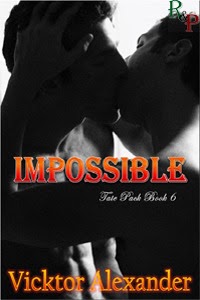 Alexander Dieson always knew that he was different. Yes, he could shift like the other wolf shifting cowboys on the Tate Ranch, but he could also make fire and a host of other things. When his parents move him to California from Texas he resolves himself to spending a life alone.

Ross Barber discovers the scent of his mate hours after the younger man moves away with his family. He spends ten years searching for Alex and finally finds him just after Alex’s life has been completely turned upside down.

Ross promises Alex that he will help find his mate’s missing siblings but in the process of their search they learn the truth about Alex’s DNA and are completely shocked by the way their lives and the Tate Ranch changes because of it. And when they learn how high up the plot to kidnap and sell paranormals actually goes, the Tate Pack will never be the same.

Impossible is the story of that elusive male wolf shifter, Ross, whom we first got to read and be curious about in Unthinkable (Tate Pack #1). I have always wondered about that huge protector, who he really was, why he was the one shifter the Alpha considered the most he trusted his family to, his history, and other curious questions. As the series proceeded, he was mentioned time and again, sometimes came up now and then, but no real focus. His character remained a little blurry.

In this book, we readers finally get the man's full story. From the time he was just in his early twenties when he first came back to Tate Pack and took a whiff scent of his mate, to the ten years he spent looking for said mate. It took him some time, but eventually, he does find and gets to claim Alex.

Alex Dieson is a curious shifter character. There is nothing within the first three parts of this book that clues in the reader on what he is, what is causing his powers to go haywire at times, or why said powers are unfocused. When the mystery is finally unveiled, everything falls into place. Including the reasons why his siblings were in such high demand from the shifternappers.

It took some time for me to get the timeline of this story straight. It has been quite some time since I first read Unthinkable, about two years ago now. When I read the flashback where Richard, Vet's mate, called for help, it was then that the plot clicked in place for me. It was so much easier to follow the story line from then onwards.

Now, author Vicktor Alexander. He is one author I turn to so I could get my **mpreg fix. So I was really quite disappointed when I was reading this and nothing came my way but then, the impossible happened. And I was giddy - yes giddy!

I am a sucker for mpreg plots, I guess it is the evil Hyde in me surfacing. I really want to see how these men handle pregnancy and labor. I got a little bit disappointed it did not turn out the way I hoped it would and ended up crying a few too many tears at that unexpected twist in the plot. This has an HEA ending, however,  made even more joyous and complete because of the children.

For those of you who follow the Tate Pack series, we finally get our answers on the enigma that is Ross Barber - the one shifter Alpha Vet entrusted his mate and children to. And yes, I so loved it when this big, alpha, dominating male faints - complete with eyes rolled back. Ha!


**mpreg - male pregnancy
Posted by multitaskingmomma at 1:05 AM