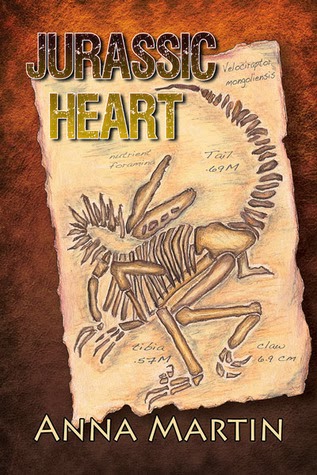 When paleontologist Nick Eisenberg learns that someone thinks they have found velociraptor bones in Alberta, his curiosity overrides his desire to stay in London. After all, he’s one of the world’s leading experts on prehistoric predators and has always wanted to look for the velociraptor’s North American cousins. There’s only one problem: eco-conservationist Hunter Joseph. While Nick supervises the dig, Hunter rallies support from the locals to oppose the way the team is destroying the landscape in their search for dinosaur bones.

Nick and Hunter just cannot get along. Hunter is self-righteous and pouty. Nick is narrow-minded and geeky. But they have to figure out how to work on the same site without killing each other, especially since someone else out there seems determined to cause Nick more problems than he could have ever imagined.

Jurassic Heart is an interesting blend of Paleontology 101, mystery and romance. Here we have paleontologist Nic who finds himself taking over a dig when the team loses its leader unexpectedly. Calling in help from his most trusted colleagues, all seems quite normal in the dirt digging, pre-historic bone discovering project. In comes Hunter Joseph, a conservationist who fights to preserve the area destroyed by the diggings.

Hunter is a man with a mission and that is to show one and all that digging for pre-historic bones of dinosaurs may be well meaning but the aftermath of the digs leave the ecology in tatters. He wants to make sure the digs are stopped or at the very least, get the scientists to be more ecologically aware.

The two men's philosophies and convictions are at odds so it is no surprise when the two do get into heated discussions and a drunken boxing match. What is unexpected, to both and all, is their attraction to each other.

Things get a bit interesting when vandalism starts going on around the dig. Not only did these manage to destroy some precious discoveries, but the dig site is fast becoming compromised. Nick cannot afford this.

I don't know what it is about Anna Martin's writing style. There is absolutely no chance for the reader to rush this read. The pace is leisurely and yet fast paced in its development, the mystery is not so deep and yet confounded me. I loved reading this tale woven so beautifully for even the scientific terms came out so basic and simple I actually felt stupid for not having known these beforehand.

The romance between the men is slow in the uptake and yet developed quite beautifully, it was just pleasurable to read. Add in the element of eroticism which was a bit HOT! it was a fantastic read.

As I said, I don't know what is with this author's style, but I enjoyed this book in its totality. Very entertaining light (and yet not) read.