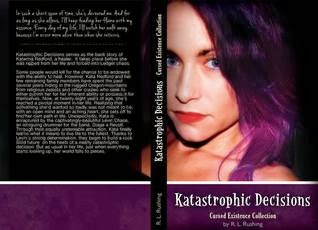 
Katastrophic Decisions serves as the back story of Katarina Redford, a healer. It takes place before she was ripped from her life and forced into Ledger chaos.

Some people would kill for the chance to be endowed with the ability to heal. However, Kata Redford and her few remaining family members have spent the past several years hiding in the rugged Oregon mountains from religious zealots and other crazies who seek to either punish her for her inherent ability or possess it for themselves. Now, at twenty eight years of age, she's reached a pivotal moment in her life. Realizing that something she'd wanted so badly was not meant to be, with an open mind and an aching heart, she sets off to find her own path in life.

Unexpectedly, Kata is enraptured by the beautiful Levin Chase, an intriguing drummer for the band, Stage a Revolt. Through their equally undeniable attraction, Kata finally learns what it means to live life to the fullest. Thanks to Levin's strong determination, they begin to build a rock solid future on the heels of a nearly catastrophic decision. But as usual in her life, just when everything starts looking up, her world falls to pieces.

Katarina, or Kat, is a healer. Depended upon by all those who love and protect her. A healer despised and hunted for being what she is.

She and her twin were ripped from all they knew as normal when the unexpected happens. Thanks to her aunt and uncle, they are saved, nurtured and loved. But her twin Kassidy leaves and seeks her own future. Soon, Kat has to make her own decision: to stay or to go.

That decision is taken from Kat when what she thought of as real, was suddenly found to be just all in her head. Needing to finally be free and experience life as she once knew it, she decides to go. On her way to her twin, she meets Levin, a drummer. Beautiful, talented, sleek, loving. Will Kat now find what she had been missing and dreamed of? Is she finally going to experience that happiness with the one person who could love and complete her?

This is the story of two young women who meet, become friends and finally find a romance they never expected - or maybe they did. It was kind of hard to read at first for the language used here much more fitted the YA genre than the more adult one. It was only after I realized that Kat was more like a teen rather than an adult for having lived cut off from the modern world did I understand the purpose of the author. Once I realized this, it made things easier and the story just clicked.

Katastrophic Decisions is a story of how circumstances can affect the decisions we make. It is the story of Kat who makes the decisions but the end results may not all be what she expected.

Unknown to her, out there, an evil was lurking in the shadows. Watching, waiting.

This is a multi-layered story of science fiction, mystery, thriller and a romance between two women both so talented in their own rights. We read about Kat and her simple life in the mountains. We read how Kat and Levin develop their simple romance that rings honest and true. Then we have the evil, ready to pounce on Kat and her talent as a gifted healer.

It would not be right to reveal the plot. It would be catastrophic should the story and its outcome be revealed with even a hint of a spoiler. I will leave you to wonder, to read and to experience what I did when I finally reached that ending.

And that is the only spoiler I will spoil for you.

Note: Although this is the second book, it is actually a prequel to MissRebel Nights and can be read as a standalone. Review based on ebook sent by author.

Posted by multitaskingmomma at 5:06 AM

Email ThisBlogThis!Share to TwitterShare to FacebookShare to Pinterest
Labels: FF, suspense, WomanOhWoman, YA