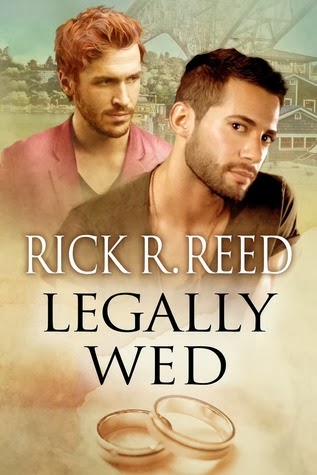 Love comes along when you least expect it. That’s what Duncan Taylor’s sister, Scout, tells him. Scout has everything Duncan wants—a happy life with a wonderful husband. Now that Seattle has made gay marriage legal, Duncan knows he can have the same thing. But when he proposes to his boyfriend Tucker, he doesn’t get the answer he hoped for. Tucker’s refusal is another misstep in a long line of failed romances. Despairing, Duncan thinks of all the loving unions in his life—and how every one of them is straight. Maybe he could be happy, if not sexually compatible, with a woman. When zany, gay-man-loving Marilyn Samples waltzes into his life, he thinks he may have found his answer.

Determined to settle, Duncan forgets his sister’s wisdom about love and begins planning a wedding with Marilyn. But life throws Duncan a curveball. When he meets wedding planner Peter Dalrymple, unexpected sparks ignite. Neither man knows how long he can resist his powerful attraction to the other. For sure, there’s a wedding in the future. But whose?

Legally Wed is the story of Duncan, a man who has lost out on love and commitment. In a drunken move, he posts a curiously headlined ad on Craigslist of all places. This is where one of my favorite fag hags from Hungry For Love, Ms Marilyn herself, comes in.

She is beautiful here. I totally loved her. She had her own story to tell and it was sad, grim, but happy and exciting all at once. She is her usual vivacious, straightforward self and develops a fantastic friendship with Duncan. Soon, they are BFFs, getting closer. She still reads the MM books and totally believes in the HEA endings, however, she is also feeling the loneliness Duncan found himself wallowing in.

As Duncan and Marilyn prepare for their marriage, they face the reality of not knowing where to begin. This is where wedding planner, Peter Dalrymple, comes in.

And he is a hunk! (I just want to shout that out in the open.)

The book's events had me grinning from ear to ear, then made me wonder over some of the views mentioned, then I found myself cringing and wondering even more before I finally ended up crying at some. I loved it when Duncan's sister unexpectedly slapped her point across and made him finally see the light. That what he was doing was immature, cowardly and just plain stupid. Somehow that slap solidified this story for me.

This is not the usual MM romance we all expect to read where, in most cases, insta-love or insta-lust precedes an HEA. This is more like how it is in real life, albeit from a fictional view. To push this view further, the author does not introduce Peter until around 45% of the book. Late his entrance may be, but it was exactly what Duncan needed. I just love that Peter came in as a bearish ginger in pink. Somehow, that image is not my usual idea for gay men, but this book is from the eye of a male author, so I think he has seen more than we women ever will.

This is a beautiful story about a man's awakening, of finding romance and a love when he least expected it. This is a story of a growth, the maturation of a gay man who finally gets himself straight after a series of events that were not so funny, nor so happy. This maturation, his growth from a cowardly and desperate man,  this was delightful to read.

In another diversion from the usual, Rick R. Reed provides us with really sexy scenes without explicitly going into erotica. There were things going on here that made me blush and I am not usually one who blushes. But blush I did and continued to do so. And wow, I was just reading about a kiss, okay? It was a freaking HOT! kiss. (enough now....)

The first lines of the blurb, Love comes along when you least expect it, really comes to light when the end is reached. It is when Duncan stopped looking for love when he finally finds it with Peter. It was the same for Marilyn.

Overall, this was a funny, frustrating, romantic and sexy book, quite hard to put down and definitely worth reading.

Posted by multitaskingmomma at 6:11 PM