Review: Lifting Tail for the Alpha (Romance on the Go) by Jenika Snow 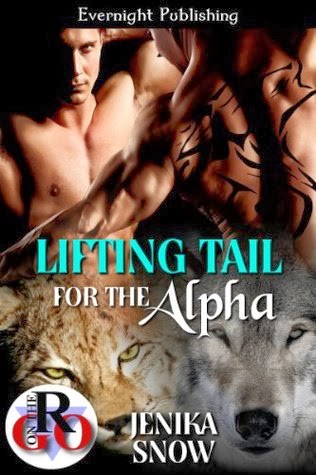 Being a bobcat shifter in a pack full of wolves, and gay on top of that, made Xavier feel as though he doesn't belong. To make matters worse he wants the future alpha of the pack, Arsen. But Arsen is arranged to marry a female wolf. Xav didn't think Arsen was gay, but that all changes when they find each other alone, and realize they are mates.

Arsen is next in line to lead his pack, and is supposed to be mated to a female, but only desires Xav, the bobcat shifter that keeps to himself. One night at a party feral cravings ignite in both of them. Arsen realizes Xavier is his, and will not let anyone or anything stand in his way of claiming him. But not everyone is happy with the future alpha being mated to a bobcat, or a male at that.

One night, things change when Arsen could not longer control his wolf. He goes after Xav who had managed to hide himself in a room out from prying eyes of the party goers and Arsen. He had always been a bit uncomfortable about his attraction to the man and never once thought he would be a mate. They are of different species after all, and let's not forget they are both men.

Well, they are mates. And they mated.

That was one HOT! mating.

None of the usual mine. None of the usual take it or leave it. Instead, we get an ultra protective alpha who does not hesitate to set the record straight and tell one and all, including the female fiance, to just up and leave if they can't take the mating.

This was a short read, but it was a good one.

Posted by multitaskingmomma at 3:18 AM