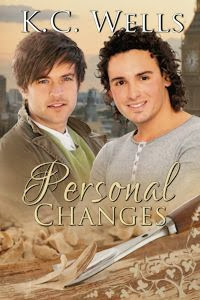 The sequel to Making it Personal...

Rick Wentworth has had enough of one night stands and quickies in clubs. It takes a night of uncharacteristic hedonism to make Rick admit what he really wants - someone to love him. But for that to happen, he needs to make some changes. Rick can do that. After all, what’s the alternative? And when he meets a guy who ticks all his boxes, he can’t believe his luck. His boss Blake Davis, and Blake’s fiancé Will Parkinson, however, aren’t convinced. They want to know more about Mr. Perfect, and their instincts are keener than Rick’s. Both men want to protect him. As it turns out, they needn’t have worried. Rick has a guardian angel…

When Angelo Tarallo sees Rick for the first time, it’s a match made in Heaven, as far as he’s concerned. And when he rescues Rick from danger, it gives him the opportunity to get to know the man who has captivated him. Before long, it’s plain to both men that this could lead somewhere. But when Angelo’s traditional Sicilian family finally discover what he’s been hiding from them for so long, an ultimatum spells heartache for the lovers – and worse.

Personal Changes is the sequel to Making it Personal (Personal #1) where we were first introduced to the character of Rick. I have to be honest, I did not really like Rick in that first book for some reason or other, so I did hesitate to read this second book which focused solely on him.

The first chapters open to the Rick I loved to hate and the MMM scene we were all warned about on the blurb, which pretty much sealed the deal for me: I do not like Rick.

K.C. Wells just managed to make me eat my words here, for as surely as I hated Rick then, I now love this guy. What happened to make me love him? Well, this guy was seen but not, was heard but never listened to, was trying to be true and yet he failed every which way he turned. He was not pathetic, he was just not getting the best luck when it came to relationships.

The first few chapters tell of Rick falling for this dream guy he met in a club. And really, that guy sounded and looked like the perfect fit. Then the author introduces us to Angelo who, at first, sounded more like a stalker rather than the potential HEA-partner for Rick. When the unmentionable hits the AC, that was when we finally get a glimpse of who Rick should be with.

Angelo, however, is not out. He also comes from a Sicilian family which could be quite traditional in their approach to life, be it right or wrong. When he is outed by his brother after seeing him with Rick, he caves. Rick is heartbroken.

Sheesh, I was heartbroken for Rick!

Ok, Ms. Wells, by this point, you had managed to make me rethink my first impression of this character. I hated Rick yet I was heartbroken for him and I really wanted to just bitch-slap Angelo.

Unfortunately, something else came before I could do this  but I was just frustrated at this point. When will these two get their break and get their HEA?

Well, they do. The process was painful, quite drastic, but I was totally satisfied when Angelo's brother got it from the supposed little angel of a smaller younger sister. Oh yeah! Loved that scene. I did not get my wish for a slap, but this was way better.

I enjoyed Making It Personal, but I have to admit, I enjoyed this more. Much more.

Personal Changes satisfied something deep in me which the first book never did. Loved how their love grew from something which Angelo enjoyed from afar into something close, personal, and oh, so romantic for both men.