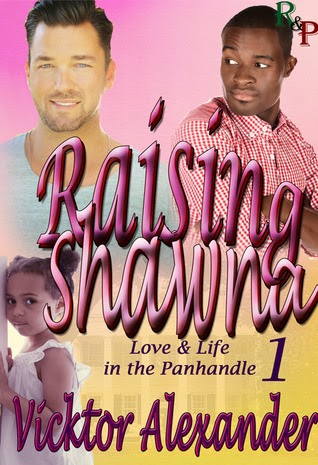 What would you do if the spirit of your dead twin brother came back?
What about if he inhabited the body of your adopted daughter?

Former drug addict, turned state prosecutor, Shane Occena has to deal with this when the little girl he rescues one night, named Shawna, declares that she’s the reincarnation of his brother Shawn, that he’d lost over eight years before. Feeling a connection to Shawna that can’t be talked away, Shane begins the adoption process and gains custody. When Shawna begins acting like Shawn, Shane takes her to see Child Psychologist, Tucker Ames. And that’s when his life really changes.

Dr. Tucker Ames spends his days talking with children helping them heal from their scars and come to grips with their gender issues and sexuality, and his nights alone, hoping for a family of his own. When he meets Shane and Shawna Occena, he finally feels as if he’s met the family that’s destined to be his. But first he has to help Shawna heal from her childhood, Shane heal from his scars, and find a way to help Shawn cross over to the other side.

But when allegations of child abuse are brought against Shane, and Tucker’s family spontaneously descends on this makeshift family in Pensacola to lend their “support”, will Tucker and Shane be able to stay together and be the parents that Shawna so desperately need? And will Shawn ever let go of his hold on Shawna and finally ascend to the afterlife? Tucker and Shane may think that they are Raising Shawna, but in the end, she may be the one to raise them all.

This was such a beautiful story of grief, survival, and finally finding that key to happiness thanks to a paranormal twist.

In Raising Shawna, we have Shane. An assistant district attorney who had started out with a brilliant future but brought to the lowest levels of drug addiction after losing all of his family. Waking up to an unknown morning after an unknown night, he realizes he needs to either shape up or be a statistic. He chose to shape up.

Stumbling onto a crying child in a dark alley on his way home, he realizes that he does have a chance to have a family. Armed with a support group made up of friends and colleagues, he adopts the little girl who calls herself Shawna.

But all is not as it seems. Soon enough, strange things are happening and Shawna may just either be a very young transgender or the reincarnation of his long dead twin brother, Shawn.

Seeking help, he is referred to top child psychologist Tucker Ames. It gets a little complicated when they realize there is some strong attraction going on between them. Realizing they needed to focus on the needs of Shawna, the two do not act on their desires. When they finally do, Shawna is referred to another psychologist who could continue to help her while Tucker and Shane begin to discover their romantic side and try to raise Shawna together, as their daughter.

The plot seemed quite simple at first, but when Shawna starts acting different, starts speaking more like a young male adult, starts dropping the child-speak and finally, starts to speak of adventures and deeds only known to both Shane and Shawn, this is when a turn to the paranormal really gets to dig deeper.

As Shane and Tucker strive hard to survive the perils of stigma and bigotry, they also need to protect their little girl. Strange she may seem at times when as Shawn, they need to show her their unconditional love. But it can be difficult. Things seem desperate, when the one person they thought to trust, was the very same who stabbed their backs.

Tucker's family come to the rescue. Theirs is a very close family who move into Shane's home to help fight get back Shawna. This is the first in a very long time that Shane had felt any familial support and he loves it. The only one missing is Shawna. And so the fight begins.

As the men and Shawna are faced with seemingly endless trials, something kept bothering me: why is Shawn still around? Every trial met is resolved, and yet he sticks around. Why? What kept him from crossing over?

This part of the story, I cannot afford to spoil. Shawn's journey is a very important part of this story, even if at times it seemed left out.

Reading this was a beautiful experience. Mr. Alexander went over and beyond and this surprised me. I am used to his light reads, never expecting to go through the emotions I did.

I started crying at the pain Shane went through, his primal scream at the beginning of the story brought immediate tears. His journey into darkness made me despair. His epiphany and eventual recovery made me smile. His meeting Shawna for the first time made me cry, and when he finally becomes a father, I cried even more. Then the lighthearted author surfaced and I found myself laughing, cringing, flushing from reading the sexy scenes, and fighting that painful goofy smile when it turned uber-romantic. When the end came, I was just overwhelmed.

Raising Shawna is just the first of the Love & Life In The Panhandle series. This is no fluffy read, neither is it a fantastical story filled with fantastical or magical men. This work is a reflection of what really is going on in our midst. However, this would not be a Vicktor Alexander book without the wit and the paranormal twist. Overwhelming this may be on the emotions, it is a journey I would love to read again and again.

I wish I could see angels too...

DEDICATED TO THE MEMORY OF TRAYVON MARTIN. 20% of the author’s royalties will go to The Justice for Trayvon Martin Foundation.

**Based on copy sent by author for an honest review.